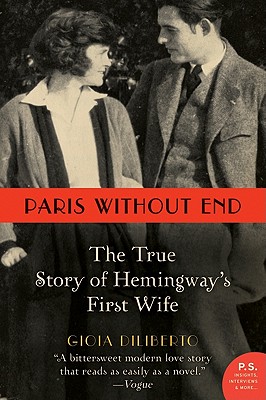 “A bittersweet modern love story [that] reads as easily as a novel.” —Vogue

“Fascinating. . . . A detailed, grittier portrait of the woman Hemingway loved and left.” —Newsday

Hadley Richardson and Ernest Hemingway were the golden couple of Paris in the twenties, the center of an expatriate community boasting the likes of Scott and Zelda Fitzgerald, Gertrude Stein and Alice B. Toklas, and James and Nora Joyce. In this haunting account of the young Hemingways, Gioia Diliberto explores their passionate courtship, their family life in Paris with baby Bumby, and their thrilling, adventurous relationship—a literary love story scarred by Hadley’s loss of the only copy of Hemingway’s first novel and ultimately destroyed by a devastating ménage à trois on the French Riviera.

Compelling, illuminating, poignant, and deeply insightful, Paris Without End provides a rare, intimate glimpse of the writer who so fully captured the American imagination and the remarkable woman who inspired his passion and his art—the only woman Hemingway never stopped loving.


Praise For Paris Without End: The True Story of Hemingway's First Wife…

“Impressively researched and judiciously written . . . Diliberto has made a lasting place for Hadley in readers’ hearts.”
— People

“A bittersweet modern love story [that] reads as easily as a novel . . . their intimacy and candour was the raw material for Hemingway’s great early short stories which achieved a powerful new realism about he relations between men and women.”
— Vogue

“Diliberto has done an exemplary job of digging out the facts…the book brings Hadley to life on the page as never before.”
— Chicago Tribune

“Tell[s] the sweeping story of [Hadley’s] romance with Hemingway with all the warmth and excitement they generated…It portrays Hadley—somewhat neglected by Hemingway’s earlier biographers—as a spirited and interesting woman.”
— Washington Post Book World

“Gioia Diliberto’s book…cuts through the simplistic myths surrounding her subjects and gives us instead a thoughtful, detailed and rewarding look at what it cost one very talented woman to inspire the best work from one of America’s…literary geniuses.”
— Minneapolis Star Tribune

“No one has written with such insight about [Hadley].”
— The Oregonian (Portland)

“Skillfully shows how Hemingway’s life with Hadley was reflected in his writing . . . Insightful…Turns both Ernest and Hadley Hemingway, with all their flaws, into recognizably human figures, as it relives their bittersweet romance.”
— Parade

“Fascinating not only for its portrait of a very special woman but for its insight into Hemingway’s personality and work as well.”
— Daily News

“An unusual biography that makes its points with intelligence and clarity.”
— Newark Star Ledger