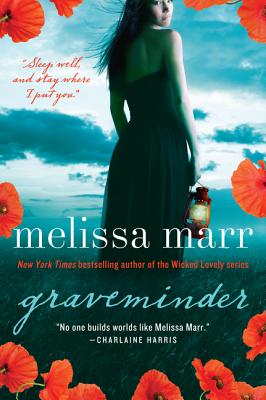 “Rebekka is no stranger to funerals and the dead. After all, her grandmother went to every funeral in her hometown, stood at every grave, and told the dead to stay where she put them. Rebekka has spent much of her life running -- from commitment, from her hometown, from the memories of her sister's suicide, and especially from her attraction to the Undertaker, Byron. But when she returns to bury her grandmother she finds out more about the town's secrets than she ever wanted to know. Filled with ancient contracts, the walking dead, and fated love, this eerie tale draws you in and leaves you yearning for more.”
— Angela Mann, Kepler's Books & Magazine, Menlo Park, CA
View the List

Rebekkah Barrow never forgot the tender attention her grandmother, Maylene, bestowed upon the dead of Claysville. While growing up, Rebekkah watched as Maylene performed the same unusual ritual at every funeral: three sips from a small silver flask followed by the words, “Sleep well, and stay where I put you.”

Now Maylene is gone and Bek must return to the hometown—and the man—she abandoned a decade ago, only to discover that Maylene’s death was not natural . . . and there was good reason for her odd traditions. In Claysville, the worlds of the living and the dead are dangerously connected—and beneath the town lies a shadowy, lawless land ruled by the enigmatic Charles, aka Mr. D. From this dark place the deceased will return if their graves are not properly minded. And only the Graveminder, a Barrow woman, and the current Undertaker, Byron, can set things to right once the dead begin to walk. . . .

“Dark and dreamy . . . Rod Serling would have loved GRAVEMINDER . . . Marr is not tapping into the latest horde of zombie novels, she’s created a new kind of undead creature . . . A creatively creepy gothic tale for grown-ups.”
— USA Today

“Melissa Marr has created a fabulous, richly-imagined world in Claysville and its attendant piece of the Underworld.”
— Seattle Post-Intelligencer

“Compelling, sexy, and riveting, you will not want to miss Graveminder!”
— Jeaniene Frost, New York Times bestselling author of the Night Huntress series

“Plan ahead to read this one, because you won’t be able to put it down! Haunting, captivating, brilliant! ”
— Library Journal (starred review)

“The über-talented Marr takes her mesmerizing storytelling talents into the adult arena. In her atmospheric and eerie tale, readers and protagonists jointly discover the secrets literally buried in this small town as Marr weaves a richly gothic tale filled with curses, responsibility and death. Outstanding!”
— RT Book Reviews (top pick)

“A deliciously creepy tale that is as skillfully wrought as it is spellbindingly imagined.”
— Kelley Armstrong

“No one builds worlds like Melissa Marr.”
— Charlaine Harris

“The emotional dance between Rebekkah and Byron will captivate female readers [and] fantasy-horror fans will demand more.”
— Kirkus Reviews

“If anyone can put the goth in Southern Gothic, it’s Melissa Marr...Marr [is] careful to ensure that the book’s wider themes ... matter to us as much as the multiple cases of heebie-jeebies she doles out.”
— NPR

“Marr creates sympathetic characters, she takes readers to places both sinister and delightful, and there’s a satisfying end to a wonderfully awful villain...Fans will be looking for a sequel to this cozy horror story as soon as they read the last page.”
— Washington Post
or support indie stores by buying on
Copyright © 2020 American Booksellers Association