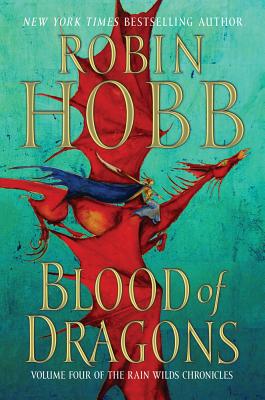 The final volume in Robin Hobb's popular Rain Wilds fantasy series, Blood of Dragons completes the story of the dragons, their keepers, and their quest to find the lost city of Kelsingra—and the mythical silver wells that the dragons need to survive.

Can Tintaglia and the Elderlings unlock the secrets of the ancient city? Or are they doomed to extinction?

The world of Robin Hobb’s Rain Wilds series has been praised by Booklist as "one of the most gripping settings in modern fantasy," and Publishers Weekly called the Rain Wilds books "a meticulously realized fantasy tale" and "a welcome addition to contemporary dragon lore."


Praise For Blood of Dragons: Volume Four of the Rain Wilds Chronicles…

“A deservedly popular author, an accomplished storyteller with an engaging and readable style.”
— London Times

“Real-life resonance gives the story extra depth…Bring on the next installment.”
— Kirkus Reviews on CITY OF DRAGONS

“Dragons, magic, and intrigue combine to make this book a fascinating read”
— Booklist

“Hobb excels at telling big stories and juggling multiple story arcs. Fans of the author and of this series who eagerly await this installment will not be disappointed”
— Library Journal (starred review)

“Hobb excels at world building, wonderful prose, and the ability to endow her creatures with humanity...The novel has many threads skillfully interwoven, to create an exciting tale of growth, change, and stubborn survival.”
— SFRevu on BLOOD OF DRAGONS