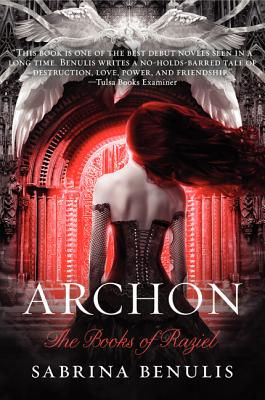 Angels and demons do battle for a girl possessed by the spirit of a powerful, dead angel in this fabulous paranormal debut by Sabrina Benulis. Archon is the first of the Books of Raziel, a truly fantastic and very hip new take on heaven’s warriors that readers of the angelic novels of Danielle Trussoni, Lauren Kate, Becca Fitzpatrick, and Alexandra Adornetto are sure to adore. Archon is new wave urban fantasy, a tale of the supernatural that brilliantly blends passion, obsession, horror, and suspense in a way that will appeal to dark fantasy fans and paranormal romance readers equally. Sabrina Benulis’s angels are creepy, sexy, and totally awesome—and, like Anne Rice’s amoral, ambiguous, and addicting vampires, they will seduce and terrify you at the same time.


Praise For Archon: The Books of Raziel…

“This plot is original in every way, and it resembles nothing that I have ever read before.”
— The Wilkes Beacon

“In this fascinating, well written first novel, Sabrina Benulis has created a world where it’s hard to tell the demons and angels apart. Be prepared to read this one in one sitting because it’s one of those rare novels that grabs you and doesn’t let go.”
— The Baryon Review
or support indie stores by buying on
Copyright © 2020 American Booksellers Association