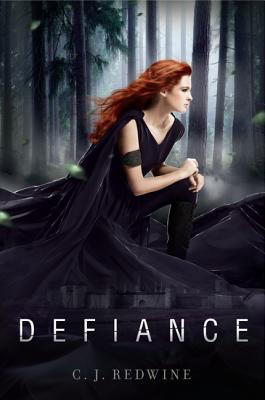 Defiance by C. J. Redwine is rich postapocalyptic YA fantasy perfect for fans of Graceling and Tamora Pierce.

While the other girls in the walled city-state of Baalboden learn to sew and dance, Rachel Adams learns to track and hunt. While they bend like reeds to the will of their male Protectors, she uses hers for sparring practice.

When Rachel's father fails to return from a courier mission and is declared dead, the city's brutal Commander assigns Rachel a new Protector: her father's apprentice, Logan—the boy she declared her love to and who turned her down two years before. Left with nothing but fierce belief in her father's survival, Rachel decides to escape and find him herself.

As Rachel and Logan battle their way through the Wasteland, stalked by a monster that can't be killed and an army of assassins out for blood, they discover romance, heartbreak, and a truth that will incite a war decades in the making.

“Spellbinding, romantic, and impossible to put down.”
— Julie Kagawa, New York Times Bestselling author of the Iron Fey series and the Blood of Eden series

“C.J. Redwine’s DEFIANCE is a gritty, thrilling adventure sprinkled with moments of breathtaking tenderness. I read it in one sitting.”
— Rae Carson, Morris Award finalist for THE GIRL OF FIRE AND THORNS

“DEFIANCE defies all reader expectations, giving us both a post-apocalyptic setting rife with history and a plot that’s as much about the discovery of one’s own humanity as it is about survival.”
— Lisa Mantchev, author of EYES LIKE STARS

C.J. Redwine is a New York Times bestselling author of YA fantasy novels, including the Ravenspire series of fairytale retellings and the Defiance trilogy. She’s still waiting for her letter from Hogwarts. Currently, she lives in Nashville with her husband, five children, three pets, and a wardrobe that stubbornly refuses to lead to Narnia, no matter how many times she tries. To learn more about C.J., visit her website at www.cjredwine.com.