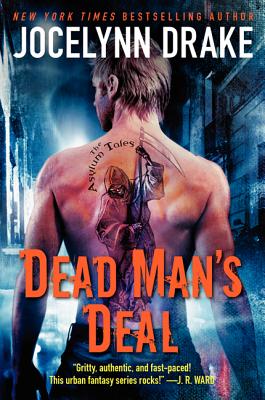 In a gritty urban fantasy world where elves, faeries, trolls, werewolves, and vampires swim free in a sea of humanity, sometimes you need an edge. Looking for a little love? Need some luck? Desperate for revenge? Gage can give you what you need. The most talented tattoo artist in town, he knows the right symbol and the right mix of ingredients and ink to achieve your heart's desire. One tattoo is all it takes. But remember, everything has its price.

The wizards know Gage is using forbidden magic, and they intend to punish him for his  transgressions. Too bad if innocent humans and monsters—entire cities—get in the way. They will quell a nascent magical uprising and Gage will be the sacrifice they need. First, though, they have to find him.

Jocelynn Drake is the New York Times bestselling author of the Dark Days series and lives in Florida. When not at her desk, she is most likely to be found playing video games, watching movies, or hanging with her family.

“A lot of fun, with a whole new take on the dark urban fantasy. Bright and breezy, with fascinating characters, and a background with hidden depths. Drake puts the ink in incredible.”
— Simon R. Green

“Angel’s Ink is an other-earthly blend of magic and technology in the best tradition of urban fantasy that refused to let me go. The continuing Asylum Tales promise to be intriguing and wildly inventive.”
— Kim Harrison

“Jocelynn is amazing at fleshing out plots, subplots and characters.”
— USA Today

“Expert storyteller Drake invites readers to join her in a spirited and spellbinding new series…. The author does a great job of introducing her mesmerizing new world and then filling it with a truly compelling cast of characters. She is on track to deliver another outstanding and inventive series.”
— Romantic Times BOOKclub

“Drake kicks off a new urban fantasy series with a strong first title....definitely check out this series from the popular Drake.”
— Booklist