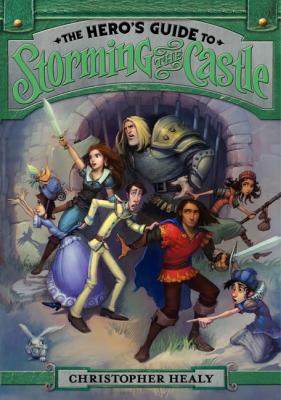 The Hero's Guide to Storming the Castle (Hardcover)

Your favorite princes and princesses are back in the hilarious and action-packed sequel to the breakout hit The Hero's Guide to Saving Your Kingdom by author Christopher Healy, which the New York Times selected as one of its best books of the year.

Prince Liam. Prince Frederic. Prince Duncan. Prince Gustav. You remember them, don't you? They're the Princes Charming, who finally got some credit after they stepped out of the shadows of their princesses—Cinderella, Rapunzel, Snow White, and Briar Rose—to defeat an evil witch bent on destroying all their kingdoms. But alas, such fame and recognition only last so long. And when the princes discover that an object of great power might fall into any number of wrong hands, they are going to have to once again band together to stop it from happening—even if no one will ever know it was they who did it.


Praise For The Hero's Guide to Storming the Castle…

“The friendships and romantic relationships between the many players continue to grow in complexity, and readers will be eager to find out where the princes’ misadventures take them next.”
— Publishers Weekly (starred review)

“Filled with witty banter, new and amusing characters, much seat-of-your-pants action, cartoony illustrations, and more clever references to fairy-tale tropes, this hefty installment is certain to keep fans of the first book happily entertained and, since it ends with a significant cliffhanger, eager for more.”
— The Horn Book

“The princes Charming reunite for another slapstick, kingdom-saving quest. . . . While the wacky comedy and witty wordplay is broken up by emotional growth and romantic story arcs, laughter takes precedence.”
— Kirkus Reviews

“Uproarious adventure follows, with plenty of action and hilarious dialogue, as well as some deeper insights into the princes, princesses, and villains. This highly satisfying sequel to the first tale still leaves readers hanging for more.”
— School Library Journal
or
Not Currently Available for Direct Purchase
Copyright © 2020 American Booksellers Association