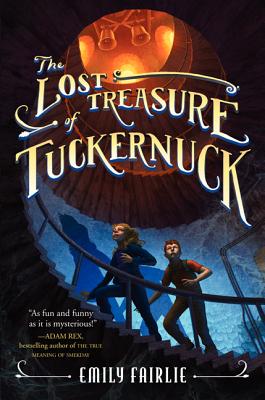 This laugh-out-loud novel by Emily Fairlie is a fresh take on the classic mystery caper. It's perfect for fans of From the Mixed-Up Files of Mrs. Basil E. Frankweiler, Chasing Vermeer, The Westing Game, and the Mysterious Benedict Society books.

Using a unique blend of notes, lists, and classic prose, The Lost Treasure of Tuckernuck tells the story of Bud and Laurie's quest to find the infamous Tutweiler Treasure. They're hot (or at least lukewarm) on the trail of scavenger hunt clues, but time is running out—the school board wants to tear down Tuckernuck Hall. Can Bud and Laurie find the treasure before it's lost forever?

Readers can enjoy solving puzzles along with the characters, and teachers will appreciate references to famous artists and architects such as Pablo Picasso and Frank Lloyd Wright. There is something for everyone in this treasure trove of wry wit, thrilling adventure, and undeniable heart!

Emily Fairlie grew up in Virginia and went to Tuckahoe Middle School, which has so far managed to escape the scandals that have plagued Tuckernuck Hall. She has been known to call on her little sister for backup and has witnessed firsthand the horror of bedazzling gone wrong. She now lives in Chicago with her dog, Binky.


Praise For The Lost Treasure of Tuckernuck (Tuckernuck Mysteries)…

“A sure hit.”
— Kirkus Reviews

“Bud and Laurie are well-developed characters, and the plot is fast paced and often funny. Readers are kept guessing about the treasure until the very end. A great read for fans of mystery or puzzles.”
— School Library Journal

“Whoa! Packed with plenty of humor, intrigue, and unexpected twists and turns, The Lost Treasure of Tuckernuck kept me guessing until the very end.”
— Lisa Yee, author of Millicent Min, Girl Genius and Warp Speed

“As fun and funny as it is mysterious!”
— Adam Rex, New York Times bestselling author of The True Meaning of Smekday and Cold Cereal

“Fans of The Westing Game will easily get wrapped up in this hilarious, delicious mystery full of surprises, but be warned: you’ll sorely wish you attended Tuckernuck after reading this...sigh.”
— David Yoo, author of The Detention Club and Stop Me If You've Heard This One Before

“The Lost Treasure of Tuckernuck reminded me of a lot of my time in sixth grade, only with more mystery and treasure-hunting, and less benchwarming for the J.V. volleyball team.”
— Mac Barnet, author of The Brixton Brothers Mysteries

“Funny, smart, mysterious, and playful-read it or risk being tuckered out.”
— David Lubar, author of Hidden Talents

“This book has everything: action, mystery, hilarity, and gerbils! What more do you need? Plus, it leaves you craving doughnuts for some reason.”
— Chris Rylander, author of The Fourth Stall books
or
Not Currently Available for Direct Purchase
Copyright © 2020 American Booksellers Association