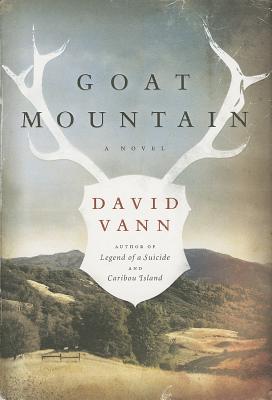 In David Vann’s searing novel Goat Mountain, an 11-year-old boy at his family’s annual deer hunt is eager to make his first kill. His father discovers a poacher on the land, a 640-acre ranch in Northern California, and shows him to the boy through the scope of his rifle. With this simple gesture, tragedy erupts, shattering lives irrevocably.

In prose devastating and beautiful in its precision, David Vann creates a haunting and provocative novel that explores our most primal urges and beliefs, the bonds of blood and religion that define and secure us, and the consequences of our actions—what we owe for what we’ve done.

David Vann is the award-winning author of Legend of a Suicide, Caribou Island, A Mile Down, and Last Day on Earth.


Praise For Goat Mountain: A Novel…

“[Goat Mountain] may just may be his finest, most contemplative work to date.”
— Booklist

“You’ve been waiting a long time for a novel that’ll capture your attention like this does, which makes Goat Mountain the book to hunt for.”
— The Clermont Sun

“Shocking. . . . The author’s descriptions of the northern California landscape--the chaparral, woods, and mountains-are also masterly. . . . This beautifully realized novel is recommended for fans of literary fiction but is not for the faint of heart.”
— Library Journal (starred review)

“Vann’s third novel is his most visceral yet: a grinding examination of killing, God and the unnamable forces that create a dynasty of violence. . . . This book is as all of Vann’s fiction: provocative and unforgiving.”
— Kirkus Reviews

“Meet David Vann, one the most talented writers in the American West. Goat Mountain, with all its responsibility and recriminations, is the man at his absolute finest.”
— Craig Johnson, author of the Walt Longmire Mysteries

“This book is written on the edge, a story of legacies, cruelty, the mysteries of DNA and blood, rewarding the reader sentence by sentence and scene by scene right to the astonishing and terrifying ending.”
— Robert Morgan, author of Gap Creek

“David Vann is at once the most timely and timeless of writers . . . Goat Mountain is a ravishing example of his mastery. . . . This book will touch you to the depths of our shared, flawed humanity.”
— Robert Olen Butler, author of the Pulitzer Prize-winning A Good Scent from a Strange Mountain

“The Story has the power of a bullet fired from a gun.”
— The Economist
or
Not Currently Available for Direct Purchase
Copyright © 2020 American Booksellers Association