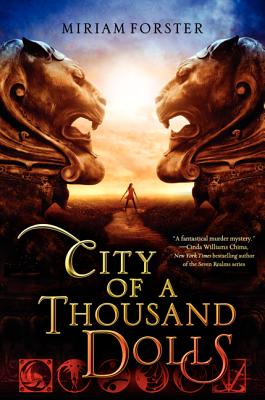 City of a Thousand Dolls

The girl with no past, and no future, may be the only one who can save their lives.

Nisha was abandoned at the gates of the City of a Thousand Dolls when she was just a little girl. Now sixteen, she lives on the grounds of the isolated estate, where orphan girls apprentice as musicians, healers, courtesans, and, if the rumors are true, assassins. She makes her way as Matron's errand girl, her closest companions the mysterious cats that trail her shadow. Only when she begins a forbidden flirtation with the city's handsome young courier does she let herself imagine a life outside the walls. Until one by one, girls around her start to die.

Before she becomes the next victim, Nisha decides to uncover the secrets that surround the girls' deaths. But by getting involved, Nisha jeopardizes not only her own future in the City of a Thousand Dolls—but also her life.


Praise For City of a Thousand Dolls…

“A fantastical murder mystery with a creative premise, heart-pounding pacing, and characters with secrets to keep.”
— Cinda Williams Chima,author of the best-selling Seven Realms series

“The mystery here is a fine one, and the concept of the City is well executed. As Nisha must choose between remaining within the cloistered safety of the City or taking her chances with the outside world, her dilemma will be familiar to teens looking toward adulthood.”
— Bulletin of the Center for Children’s Books

“With fantastic world building and a wonderful heroine, City of a Thousand Dolls intrigued me from the first page.”
— Cindy Pon, author of Silver Phoenix

Miriam Forster is a recovering barista and former bookseller who is obsessed with anthropology, British television, and stories of all kinds. She lives in Oregon with her husband and her cat. City of a Thousand Dolls was her debut novel.