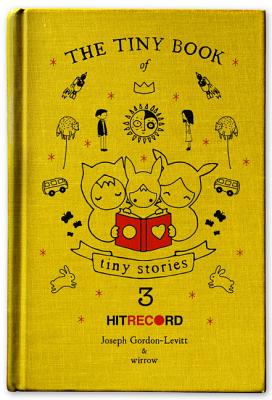 From Golden Globe Award–nominee Joseph Gordon-Levitt and his online creative coalition hitRECord, and in collaboration with the artist Wirrow, comes Volume 3 in the Tiny Book of Tiny Stories series.

To create The Tiny Book of Tiny Stories, Joseph Gordon-Levitt, known within the hitRECord.org community as RegularJOE, directs thousands of collaborators to tell tiny stories through words and art. With the help of the entire creative collective, he culls, edits, and curates the massive numbers of contributions into a finely tuned collection.

The Tiny Book of Tiny Stories, Volume 3 once again brings together art and voices from around the world to unite and tell stories that defy size.


Praise For The Tiny Book of Tiny Stories: Volume 3…

“From the department of Perfect Hipster Stocking Stuffers . . . Buy it for your brooding-artist cousin, but then selfishly decide to keep it for yourself.” — Philadelphia City Paper

“Not just a coup for [hitRECord.org] but also an object lesson in how it works.” — New York Times

“A brand new collection of moving (and funny!) stories from the hitRECord family and It Books.” — Entertainment Weekly

Dive into its shortest of short stories and relish its captivating illustrations, and soon enough you’ll realize: Even if you’re not physically carrying the book, you’re carrying its stories with you throughout your days . . . [an] itty bitty bound book with a big ol’ heart. — Austin Chronicle