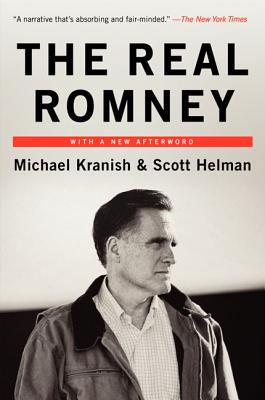 “A fascinating story [that] sheds next light on an elusive subject.”
—Boston Globe

Despite his political prominence, Mitt Romney remains an enigma to many in America. Who is the man behind that sweep of dark hair and the high-wattage smile? A savvy politician or someone who will simply say anything to win? A business visionary or a ruthless dealmaker? In this definitive, unflinching, and widely-acclaimed biography by Boston Globe investigative reporters Michael Kranish and Scott Helman, readers will finally discover the real Mitt Romney. Based on hundreds of interviews and more than five years of reporting, The Real Romney offers for the very first time a full understanding of this complex political figure.

Michael Kranish, deputy chief of the Boston Globe's Washington Bureau, has been a congressional reporter, White House correspondent, and national political reporter. Kranish coauthored, with other Globe reporters, John F. Kerry: The Complete Biography. He is also the author of Flight from Monticello: Thomas Jefferson at War.

Scott Helman is a staff writer at The Boston Globe, where he has worked as a reporter and an editor for more than a decade. He was previously the paper's political editor and a national political reporter, serving as a lead writer on the 2008 presidential campaign.


Praise For The Real Romney…

“The Real Romney pulls together lots of details into a narrative that’s absorbing and fair-minded.”
— Michiko Kakutani, The New York Times

“Balanced and rigorous reporting on Romney’s life and career. . . . The authors are especially good on his close relationship with his father, a three-term Michigan governor who unsuccessfully ran for president in 1968.”
— USA Today

“The Real Romney lays out Romney’s story in full and clear detail, including fascinating in-depth stuff about his family’s history, showing us a Romney for whom family and faith remain unshakable pillars and who knows that his ‘power-ally is money.’”
— The Los Angeles Times

“A timely, balanced new biography. . . . An impressively researched and thought-provoking portrait of a man many Americans may want to know more about in the coming weeks and months.”
— The Boston Globe

“Kranish and Helman are veteran and well-regarded reporters. . . . They give a comprehensive account of the Bain years -- the greatest contribution of their book.”
— Michael Tomasky, The New York Review of Books

“The writers have thoroughly trawled through the would-be-president’s history. The book charts the various stages of Romney’s polymorphic life in impressive detail. . . . All this is well done. The analysis of Romney’s time at Bain is balanced and fair.”
— The Economist

“Kranish and Helman have assembled a genuinely compelling story and a more thorough record of Romney’s life than has yet appeared.”
— The Washington Post

“A fascinating story [that] sheds new light on an elusive subject. . . . It illustrates well how in his private life and in business, he has relied on a tight, protective circle all his life.”
— The Financial Times

“A comprehensive and eminently fair-minded biography of the GOP’s fitful frontrunner.”
— The New Republic

“Balanced and informative. . . A well-written and useful resource for Romneyana great and small.”
— Louis Menand, The New Yorker

“The great service of this new biography is that it humanizes Romney. The authors sniff over their subject with bloodhound thoroughness, dredging up old report cards, housing deeds, and family records and videos. They interview seemingly everyone who had contact with Romney in every phase of his life.”
— The New York Times Book Review