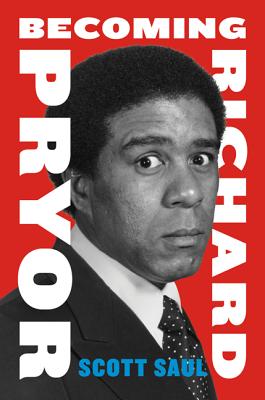 Richard Pryor may have been the most unlikely star in Hollywood history. Raised in his family’s brothels, he grew up an outsider to privilege. He took to the stage, originally, to escape the hard-bitten realities of his childhood, but later came to a reverberating discovery: that by plunging into the depths of his experience, he could make stand-up comedy as exhilarating and harrowing as the life he’d known. He brought that trembling vitality to Hollywood, where his movie career—Blazing Saddles, the buddy comedies with Gene Wilder, Blue Collar—flowed directly out of his spirit of creative improvisation. The major studios considered him dangerous. Audiences felt plugged directly into the socket of life.

Becoming Richard Pryor brings the man and his comic genius into focus as never before. Drawing upon a mountain of original research—interviews with family and friends, court transcripts, unpublished journals, screenplay drafts—Scott Saul traces Pryor’s rough journey to the heights of fame: from his heartbreaking childhood, his trials in the Army, and his apprentice days in Greenwich Village to his soul-searching interlude in Berkeley and his ascent in the “New Hollywood” of the 1970s.

Becoming Richard Pryor illuminates an entertainer who, by bringing together the spirits of the black freedom movement and the counterculture, forever altered the DNA of American comedy. It reveals that, while Pryor made himself a legend with his own account of his life onstage, the full truth of that life is more bracing still.

“Absorbing, incisive....With skill and insight, Saul shows how both the best and the worst of Pryor could merge into a great body of work unmatched by anyone who was ever paid to make people laugh.” — USA Today

“The most detailed and rigorously researched work on the comic’s life and performances....Pryor was both the quintessential hipster and the vulnerable, damaged witness of his age...Becoming Richard Pryor captures these dimensions of the persona and the man behind it very well.” — Washington Post

“Sharply observed....lays out the case that Pryor was not only a comic genius but ‘a bellwether of the great changes of postwar American life, some of which he helped incite.’...Riveting.” — TIME magazine

“A gripping read....The only book you need on its subject.” — Sunday Times (London)

“Insightful and expansive, Scott Saul’s remarkable biography of the now legendary comic chronicles how a sensitive brilliant man with a hardscrabble past mined his personal life for American entertainment, revolutionizing stand-up along the way.” — Playboy, "This Winter's Best Books"

“A fascinating, exhilarating read. Saul dives deeper and comes up with more treasure than previous biographers; he deftly traces the stamp that Pryor left on American culture at one of its more impressionable moments…I didn’t want to put the book down and couldn’t wait to get back to it.” — Michael Chabon, bestselling and Pulitzer Prize-winning author of The Amazing Adventures of Kavalier & Clay and Telegraph Avenue

“Becoming Richard Pryor is a compulsively readable book that sets a new gold standard for American biography. Scott Scaul’s research is extraordinary; his writing his taut, elegant, and insightful; and he captures both the hilarity and pain that made Richard Pryor such a towering figure.” — Debby Applegate, winner of the Pulitzer Prize for biography and author of the forthcoming Madam: The Notorius Life and Times of Polly Adler

“The Richard Pryor biography we’ve been waiting for.” — Deadspin

“With Becoming Richard Pryor, Scott Saul gives us the fullest picture yet of a great and puzzling American figure. What starts as a procedural on the making of an artist becomes a story of a man desperate to be free.” — RJ Smith, author of The One: The Life and Music of James Brown

“Pryor has had the good fortune to fall into the hands of a writer with the smarts to understand both his greatness and his madness. Becoming Richard Pryor is a first-rate biography.” — Peter Biskind, author of Easy Riders and Raging Bulls

“Becoming Richard Pryor takes you on a wild, tumultuous ride. Scott Saul’s superb storytelling is a perfect match for his subject--he keeps you mesmerized, laughing, crying, stunned, hungry, and above all, surprised.” — Robin D. G. Kelley, author of Thelonious Monk: The Life and Times of an American Original

“Becoming Richard Pryor is a book that breaks new ground...Saul details the amazing way that Richard found his way out of the life for which he seemed destined and into the world of the performing arts.” — New York Times Book Review

“This is a well-executed study that gives Pryor due credit as pioneer, intellectual and artist. Better written and more thoughtful than David and Joe Henry’s Furious Cool. The latter remains worth reading, but this book is the place to start.” — Kirkus Reviews

“Magisterial....Brilliantly reveals the glorious highs and lows of Pryor’s life....Becoming Richard Pryor reveals itself to be not simply a biography, but the compassionate map of a terra incognita.” — Independent

“Drawing on interviews with family and friends, unpublished journals and court records, Saul jauntily chronicles the year-by-year, and almost day-by-day, evolution of Richard Pryor. Glaringly honest, Saul shines a light on a revolutionary stand-up comic who perfected the art of dramatizing his own imperfections, and the world’s.” — Publishers Weekly

“Drawing on interviews with family and friends, unpublished journals and court records, Saul jauntily chronicles the year-by-year, and almost day-by-day, evolution of Richard Pryor. Glaringly honest, Saul shines a light on a revolutionary stand-up comic who perfected the art of dramatizing his own imperfections, and the world’s.” — Booklist (starred review)

Scott Saul is a professor of English at the University of California–Berkeley. His writing has appeared in Harper’s, the New York Times, and The Nation, among other publications. He is the author of Freedom Is, Freedom Ain’t: Jazz and the Making of the Sixties. He lives in Berkeley, California.