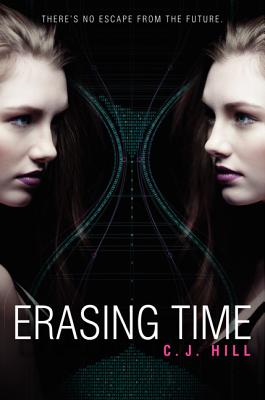 When twins Sheridan and Taylor wake up 400 years in the future, they find a changed world: domed cities, no animals, and a language that's so different, it barely sounds like English. And the worst news: They can't go back home.

The twenty-fifth-century government transported the girls to their city hoping to find a famous scientist to help perfect a devastating new weapon. The same government has implanted tracking devices in the citizens, limiting and examining everything they do. Taylor and Sheridan have to find a way out of the city before the government discovers their secrets. To complicate matters, the moblike Dakine has interest in getting hold of them too. The only way for the girls to elude their pursuers is to put their trust in Echo, a guy with secrets of his own. The trio must put their faith in the unknown to make a harrowing escape into the wilds beyond the city.

Full of adrenaline-injected chases and heartbreaking confessions, Erasing Time explores the strength of the bonds between twins, the risks and rewards of trust, and the hard road to finding the courage to fight for what you believe in.

Dramatic twists and turns to the very end ensure readers’ attention and the possibility of an equally thrilling sequel.
— Kirkus Reviews

Hill leaves the ending wide open for a sequel, and the combination of action and romance—which has become a trademark of the ever-growing trend of dystopian series—will make readers eager for the next installment.
— Booklist

C. J. Hill is the mother of twins. They aren't identical, but this doesn't mean she always calls them by the right name. In fact, she occasionally calls all her children by the wrong names (she has five) and has even been known to throw the dog's name into the mix. Laugh now, but you'll do the same thing when you have kids.

If C. J. had a time machine and could visit another century, she would probably go to the Regency era instead of the future. According to all the novels she's read, the past was filled with a multitude of dashing lords and viscounts who were always on the lookout for damsels in distress, whereas the future is populated by scary dystopian societies.