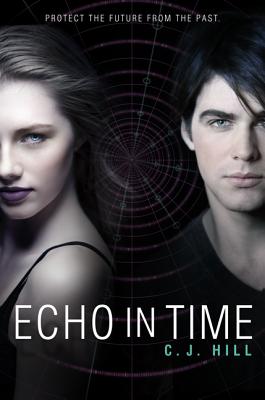 Echo in Time delivers on "the possibility of an equally thrilling sequel" (Kirkus Reviews) to Erasing Time.

After being pulled 400 years into the future, twins Taylor and Sheridan have found some refuge from the government of Traventon, which used the dangerous Time Strainer to yank the girls from the past. Yet the threat of the dangerous technology still looms. Taylor and an ally, Joseph, are selected to go on a mission to destroy the time machine and weapon. But their actions before they do may have major consequences for the future and the past.

Action-packed and romantic, this futuristic sequel to Erasing Time is perfect for fans of dystopian and sci-fi novels such as The Maze Runner by James Dashner, Across the Universe by Beth Revis, and Matched by Ally Condie.

PRAISE FOR ERASING TIME: “Dramatic twists and turns to the very end ensure readers’ attention and the possibility of an equally thrilling sequel.”
— Kirkus Reviews

Hill leaves the ending wide open for a sequel, and the combination of action and romance—which has become a trademark of the ever-growing trend of dystopian series—will make readers eager for the next installment.
— Booklist

Part time travel, part sci-fi, all adventure! Twins ripped from their own time with nothing to hold on to but each other . . . and one enigmatic guy. Hill deftly explores themes of loyalty; to country, family, love, and—ultimately—to self. A stand-out tale!
— Aprilynne Pike, New York Times bestselling author of Wings

C. J. Hill is the mother of twins. They aren't identical, but this doesn't mean she always calls them by the right name. In fact, she occasionally calls all her children by the wrong names (she has five) and has even been known to throw the dog's name into the mix. Laugh now, but you'll do the same thing when you have kids.

If C. J. had a time machine and could visit another century, she would probably go to the Regency era instead of the future. According to all the novels she's read, the past was filled with a multitude of dashing lords and viscounts who were always on the lookout for damsels in distress, whereas the future is populated by scary dystopian societies.