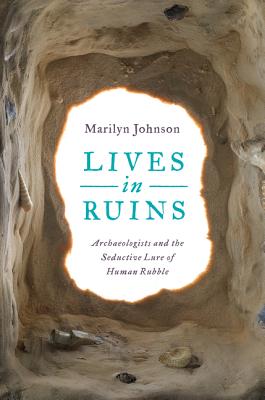 Archaeologists and the Seductive Lure of Human Rubble

The author of The Dead Beat and This Book is Overdue! turns her piercing eye and charming wit to the real-life avatars of Indiana Jones—the archaeologists who sort through the muck and mire of swamps, ancient landfills, volcanic islands, and other dirty places to reclaim history for us all.

Pompeii, Machu Picchu, the Valley of the Kings, the Parthenon—the names of these legendary archaeological sites conjure up romance and mystery. The news is full of archaeology: treasures found (British king under parking lot) and treasures lost (looters, bulldozers, natural disaster, and war). Archaeological research tantalizes us with possibilities (are modern humans really part Neandertal?). Where are the archaeologists behind these stories? What kind of work do they actually do, and why does it matter?

Marilyn Johnson’s Lives in Ruins is an absorbing and entertaining look at the lives of contemporary archaeologists as they sweat under the sun for clues to the puzzle of our past. Johnson digs and drinks alongside archaeologists, chases them through the Mediterranean, the Caribbean, and even Machu Picchu, and excavates their lives. Her subjects share stories we rarely read in history books, about slaves and Ice Age hunters, ordinary soldiers of the American Revolution, children of the first century, Chinese woman warriors, sunken fleets, mummies.

What drives these archaeologists is not the money (meager) or the jobs (scarce) or the working conditions (dangerous), but their passion for the stories that would otherwise be buried and lost.


Praise For Lives in Ruins: Archaeologists and the Seductive Lure of Human Rubble…

“As she did in her previous books about librarians and obituary writers, Johnson finds that the line between inspirationally nutty and actually crazy is measured in the joy of the work.”
— Entertainment Weekly

“An engrossing examination of how archaeologists re-create much of human history, piece by painstaking piece.”
— Kirkus Reviews (starred review)

“A lively love letter to archaeologists...Many archaeologists credit Indiana Jones with sparking their passion, and Johnson may well inspire a new generation to take up this calling.”
— Publishers Weekly (starred review)

“World travel, drinking, lust in the dust-our lives are all in ruins, indeed, and Johnson reveals why we wouldn’t want it any other way.”
— Sarah Parcak, National Geographic Society Fellow and author of Satellite Remote Sensing for Archaeology

“The great pleasure with which I read this book took me back to when I was eight years old and wanted to be an archaeologist. Marilyn Johnson does a wonderful job uncovering the delight in this tough, important, and exhilarating profession.”
— Ian Frazier, author of Great Plains, Travels in Siberia, and Humor Me: An Anthology of Funny Contemporary Writing

“Johnson’s contribution to this genre is unmatched...wonderful and engaging work peels back the superficial glamour surrounding archaeology and archaeologists...Without glitz, the author has created a very enjoyable work that will be appreciated by experts in the field and casual readers alike.”
— Library Journal (starred review)

“Johnson writes in a charming and thoughtful manner, weaving in her personal observations, insightful quotes from her subjects and a wide-eyed fascination with her subjects.”
— Seattle Times

Marilyn Johnson is a former editor and writer for Life, Esquire, and Outside magazines, and lives with her husband, Rob Fleder, in New York's Hudson Valley.