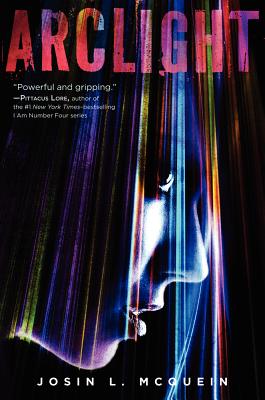 “This is a page-turner of dystopian fiction unlike anything I've ever read. A stunning debut novel, there's a reality throughout this work that one doesn't usually find in science fiction aimed at adolescents. So much more than just an 'entertainment for young people,' this story of identity and the courage found when one faces one's worst nightmares deserves a very wide audience.”
— Keri Rojas, Cornerstone Cottage Kids, Hampton, IA
View the List

The Arclight is the last refuge in a post-apocalyptic world consumed by terrifying creatures called the Fade. No one crosses the wall of light that keeps the last human survivors safe. There's nothing else left and nowhere to go. Or so they thought, until Marina, a lone teenage girl, stumbles out of the Dark.

Marina doesn't remember who she is, where she came from, or how she survived. And the Fade want her back. When one of them infiltrates the compound and recognizes Marina, she begins to unlock secrets she didn't even know she had. Marina knows she's an outsider, but she'll do anything to protect those who saved her. Whether they want her help or not.

“Powerful and gripping straight out the door—Arclight will keep you up at night, if you dare stay awake.”
— Pittacus Lore, author of the #1 New York Times bestselling I Am Number Four series

“McQuein strongly evokes the claustrophobic tyranny of adult authority and institutional spaces, as well as the irrational human faith in the voice of ‘experience,’ in this fine debut.”
— Publishers Weekly

“Marina has a strong but inexplicable connection to the Fade, [and] she and Tobin enter dangerous dark territory to discover the truth.”
— Booklist

“In a dystopian future colony that holds back the monsters that have taken over the world, a girl tries to find her place. … Marina … stands out as an interesting and spunky character, enough of a rebel to take some major chances.”
— Kirkus Reviews

Josin L. McQuein was born and raised in Texas. Now she and her three dogs live in a town so small that the buffalo outnumber the people. She is the author of Arclight and Premeditated.