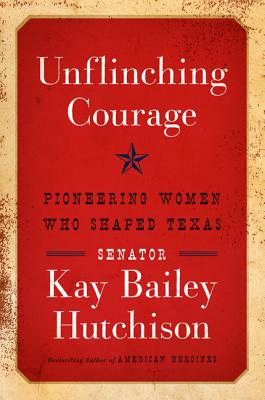 A passionate storyteller, Senator Hutchison introduces the mothers and daughters who claimed a stake in the land when it was controlled by Spain, the wives and sisters who valiantly contributed to the Civil War effort, and ranchers and entrepreneurs who have helped Texas thrive.

Unflinching Courage: Pioneering Women Who Shaped Texas is a celebration of the strength, bravery, and spirit of these remarkable women and their accomplishments.

“A series of brightly written biographies of an extraordinary gallery of pioneering women, many of whom are unknown even to the most history-minded of Texans. …The lesser-known shapers of Texas are presented in as full and interesting detail as the more celebrated.”
— Dale L. Walker, Dallas News

“Former U.S. Senator Hutchison was the first woman to represent Texas in the Senate, and she’s admirably devoted her authorial career to writing women back into the historical record.”
— Publishers Weekly

Senator Kay Bailey Hutchison grew up in La Marque, Texas, and graduated from the University of Texas and UT Law School. She was twice elected to the Texas House of Representatives. In 1990 she was elected Texas state treasurer, and in 1993 she was the first woman elected to represent Texas in the U.S. Senate. In 2006 she was elected chairman of the Senate Republican Policy Committee, becoming one of the top four leaders of Senate Republicans and the only woman. She lives in Dallas with her husband, Ray, and their daughter and son, Bailey and Houston.