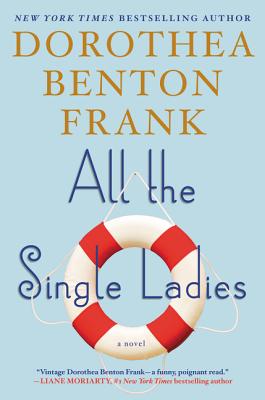 All the Single Ladies

The perennial New York Times bestselling author returns with an emotionally resonant novel that illuminates the power of friendship in women’s lives, and is filled with her trademark wit, poignant and timely themes, sassy, flesh-and-blood characters, and the steamy Southern atmosphere and beauty of her beloved Carolina Lowcountry.

Few writers capture the complexities, pain, and joy of relationships—between friends, family members, husbands and wives, or lovers—as beloved New York Times bestselling author Dorothea Benton Frank. In this charming, evocative, soul-touching novel, she once again takes us deep into the heart of the magical Lowcountry where three amazing middle-aged women are bonded by another amazing woman’s death.

Through their shared loss they forge a deep friendship, asking critical questions. Who was their friend and what did her life mean? Are they living the lives they imagined for themselves? Will they ever be able to afford to retire? How will they maximize their happiness? Security? Health? And ultimately, their own legacies?

A plan is conceived and unfurls with each turn of the tide during one sweltering summer on the Isle of Palms. Without ever fully realizing how close they were to the edge, they finally triumph amid laughter and maybe even newfound love.


Praise For All the Single Ladies: A Novel…

One important issue in the book is how these women have reached a point in their lives where they probably expected to have a secure future (retirement, 401K, etc.), but because of unforeseen circumstances they don’t. How do you think this impacts the plot? Their choices?

New friends are at the heart of All the Single Ladies. Friendship, which seems so easy in kindergarten, can be so awfully hard for grown-ups. Lisa, Carrie and Suzanne quickly become friends. Do you think it is harder to make new friends the older you get? Do you still have any friends you made in kindergarten or grade school?

The women in All the Single Ladies have come to their status via different routes: Suzanne’s many years of singledom in Charleston followed a long relationship in Chicago. Lisa has been on her own since divorcing Mark 20 years earlier and has singlehandedly raised their daughter. Carrie is a serial monogamist looking for the next marriage prospect almost as soon as the previous one dies. Do you think Suzanne and Lisa respected Carrie a little bit less for requiring a man to complete her life? Did you feel Carrie was as strong and independent as the other two women despite never having stood on her own two feet? Did you respect her less?

Despite Carrie and Suzanne’s devoted friendship to Kathy Harper, there was a lot about her life she hadn’t shared. Were you surprised by how much they didn’t know about her? Do you think friendships formed later in life are more guarded? What makes people less apt to spill all their secrets even to dear friends?

Friendships can change with life’s tides. Your single circle of friends changes once you marry. That circle changes again when you have children. Have you noticed that pattern in your own life, or have you been able to maintain different circles? If you’ve been divorced, how did that affect your friendships?

What is your interpretation of the Emily Dickinson poem at the start of the book and how it relates to All the Single Ladies?

In the beginning of the book, Lisa respects but isn’t overly fond of Dr. Harry Black. In fact, she refers to him as Darth Vader. As he begins to court Suzanne, however, she gets to see his other sides. Carrie and Suzanne did the same thing with Paul. Would you say they were all too quick to judge? How often do you catch yourself rushing to judgment? And how do you stop yourself?

It is very hard to refrain from viewing one’s children as a direct reflection of you and your parenting. Describe a situation where you took a choice or decision of your child’s too personally. How did you handle it? What was the eventual outcome? What did you learn?

How do you feel about online dating? Do you think it is easier for younger generations? What other ways are there for more mature women to meet single (and appropriate!) men? Would you try it, or would you be more likely to encourage a friend to try it?

What is your opinion concerning the legalization of marijuana? If you are opposed to it, do you feel differently regarding medical use to alleviate pain for certain individuals? How would you feel if your child’s career was based on something you could not ethically support?

If, knowing where their paths are headed at the end of the book, you could step into the shoes of one character — Suzanne’s, Lisa’s, Carrie’s or Miss Trudie’s — which ones would you wear and why?