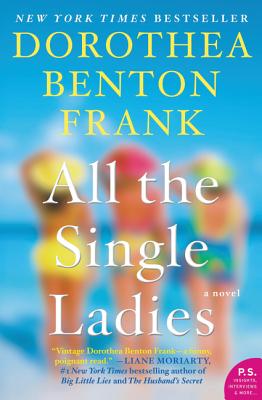 All the Single Ladies (Paperback)

In this fast-paced and evocative novel, beloved New York Times bestselling author Dorothea Benton Frank again takes us deep into the Lowcountry of South Carolina, where three unsuspecting women are brought together by tragedy and mystery

Lisa St. Clair knows a thing or two about weathering storms. A dedicated nurse with a healthy sense of humor, she single-handedly raised her truculent daughter, Marianne, after her ex walked out on them twenty-four years ago, sending them a lottery ticket once a year as support. One day he reappeared and lured their daughter into a dubious but lucrative venture in Colorado. Now mother and daughter aren’t speaking.

So when Kathy Harper, Lisa’s favorite patient, loses her battle with cancer, Lisa finds herself drawing closer to Carrie and Suzanne, the devoted friends who were always by Kathy’s side. As these three women’s lives inevitably connect, they share their concerns about men, getting older, and the horrors of maintaining financial stability. Suzanne’s ninety-nine-year-old grandmother, a former chanteuse, offers unexpected perspectives on the mores of the day. Carrie’s greedy ex-stepchildren are a chorus of cackling crows. And Lisa’s mother just can’t help herself as she henpecks her to distraction.

Somehow their conversations always return to the enigma of Kathy. Who was she? What did her short life mean?

As Lisa, Carrie, and Suzanne power walk the beaches of the Isle of Palms, they gradually uncover the truth of Kathy’s life and unfurl plans to secure their own futures, as fate steps in to help them discover that being single doesn’t have to mean being alone.

A contemporary voice of the South, Dorothea Benton Frank has been beloved by fans and friends alike since her debut novel Sullivans Island. Readers from coast to coast have fallen for the quick wit and the signature humor that permeated her many bestselling novels.


Praise For All the Single Ladies: A Novel…