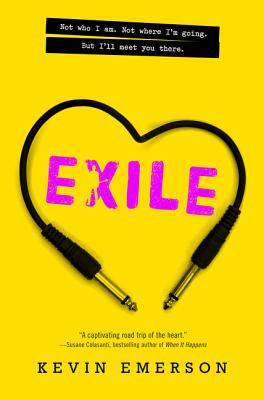 Kevin Emerson's Exile, book one of the Exile series, combines the swoon-worthy romance of a Susane Colasanti novel with the rock 'n' roll of Eleanor & Park.

Summer Carlson knows how to manage bands like a professional—minus the whole falling-for-the-lead-singer-of-the-latest-band part. But Caleb Daniels isn't an ordinary band boy—he's a hot, dreamy, sweet-singing, exiled-from-his-old-band, possibly-with-a-deep-dark-side band boy. She also finds herself at the center of a mystery she never saw coming. When Caleb reveals a secret about his long-lost father, one band's past becomes another's present, and Summer finds it harder and harder to be both band manager and girlfriend. Maybe it's time to accept who she really is, even if it means becoming an exile herself. . . .

“Emerson’s seasoned music references and deep knowledge of the business (including its slimy side) will draw readers in, but it’s the emerging conspiracy theories that give the book its edge-and provide the perfect setup for the sequel.”
— Publishers Weekly

“A captivating road trip of the heart.”
— Susane Colasanti, Bestselling Author of When It Happens

Praise for THE LOST CODE: “The high-stakes narrative moves forward with momentum, and a romance between Owen and Lilly is gracefully unveiled.”
— Publishers Weekly

Praise for THE DARK SHORE: “The twists at Desenna are expertly executed, surprising while illuminating, and...pack emotional sucker punches. Readers will beg for the follow-up to this tense, well-plotted sequel.”
— Kirkus Reviews

Kevin Emerson is the author of many books for kids and teens, including the Chronicle of the Dark Star series, which began with the acclaimed novel Last Day on Mars, as well as The Fellowship for Alien Detection, Breakout, and Carlos Is Gonna Get It. A former science teacher, Kevin is also a drummer and singer, most recently with his bands Northern Allies and the Board of Education. He lives in Seattle, Washington. You can visit him online at www.kevinemerson.net.