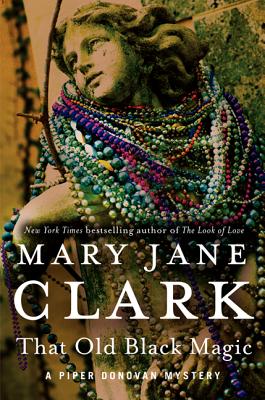 Aspiring actress and wedding-cake decorator Piper Donovan has barely arrived in New Orleans to perfect her pastry skills at the renowned French Quarter bakery, Boulangerie Bertrand, when a ghastly murder rocks the magical city. Intrigued by the case, Piper can’t help but look for the “Hoodoo Killer” among the faces around her. Could it be the handsome guide eager to give her special private tours? Or the inscrutable jazz musician who plays on historic Royal Street? What about the ratings-starved radio talk-show host? Or even the amiable owner of the local Gris-Gris Bar?

Though Piper has a full plate decorating cakes for upcoming wedding celebrations, she’s also landed an exciting but unnerving role in a movie being shot in the Big Easy. When the murderer strikes again, leaving macabre clues, she thinks she can unmask the killer. But Piper will have to conjure up some old black magic of her own if she hopes to live long enough to reveal the truth.

Mary Jane Clark worked at CBS News for nearly three decades. Her twelve KEY News media thrillers were inspired by that experience. Envisioning the Piper Donovan/Wedding Cake mystery series, Mary Jane enrolled in cake-decorating classes and researched unique wedding locations. The daughter of an FBI agent and a mother who customized cakes for the neighborhood kids when she was growing up, Mary Jane has two grown children and splits her time between New Jersey and Florida.