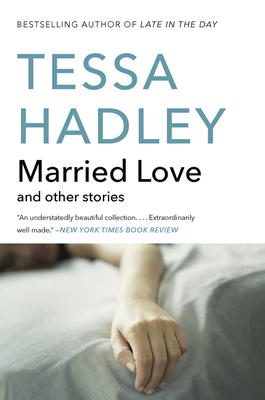 In this brilliant collection, Tessa Hadley showcases beautifully her formidable talent for writing domestic fiction that rises about the genre to become literary art.

Married Love is a masterful collection of short fiction from one of today’s most accomplished storytellers. These tales showcase the qualities for which Tessa Hadley has long been praised: her humor, warmth, and psychological acuity; her powerful, precise, and emotionally dense prose; her unflinching examinations of family relationships.

Here are stories that range widely across generations and classes, exploring the private and public lives of unforgettable characters: a young girl who haunts the edges of her parents’ party; a wife released by the sudden death of her film-director husband; an eighteen-year-old who insists on marrying her music professor, only to find herself shut out from his secrets.

In this stunning collection, Hadley evokes worlds that expand in the imagination far beyond the pages, capturing domestic dramas, generational sagas, wrenching love affairs and epiphanies, and distilling them to remarkable effect.


Praise For Married Love: And Other Stories…

“Hadley writes like a dream, even if some of her stories can haunt you like a nightmare….Hadley’s measured, perfectly controlled prose masterfully chronicles her characters’ turmoil; these stories are gemlike and unforgettable.”
— Boston Globe

“Hadley’s power...is best felt as she teases out the often dangerous crackles in the air and cracks in the heart. There’s a louche tautness to her prose...”
— Helen Davies, Sunday Times (London)

“[Hadley’s stories] are often like movie clips of lives in transit, their small shifts of focus yielding up flashes of psychological insight. . . . Hadley excels at the domestic context, at pinpointing the particular quiddity on which an individual character turns; at marking the tiny swings of allegiance in human relationships.”
— Rachel Hore, The Independent

“One of the most interesting writer around....This collection shows a writer quietly growing in style, perception and grace. She conveys to the reader that rare ability to see completely into someone else’s head.”
— Philip Womack, The Spectator

“Only Alice Munro and Colm Tóibin, among all the working short story writer I’m aware of, are so adept at portraying whole lives in a few thousand words. With Married Love, Hadley joins their company as one of the most clear-sighted chroniclers of contemporary emotional journeys.”
— Edmund Gordon, The Guardian

“Married Love…could more accurately be described as a concentration, not a collection, of short stories. The stories here are, in effect, a dozen novels in miniature....There is a grand sweep and an emotional charge that brings to mind DH Lawrence.”
— Elena Seymenliyska, Daily Telegraph (London)

“There is not a lot of domestic bliss to be found in these finely rendered stories, but there are many small moments of everyday life made recognizable by an exceptional storyteller. Highly recommended.”
— Library Journal

“Hadley’s command of the telling detail, the unspoken riposte, and the subtle interpersonal struggles that fuel everyday human actions infuses this collection with both saucy fire and sobering fatalism.”
— Booklist

“Her talent is to take these small details of everyday life and build them into stirring narratives….Hadley gives space to the smallest emotional currents, allowing them to expand.”
— Susannah Meadows, New York Times

“Twisting her pen with words so skilled and a sensitivity so finely honed it takes mere fragments to convey the lifetime of a character to the reader, Hadley brings us twelve of the finest short stories in print today.”
— Andrea Huehnerhoff, Sacramento Book Review