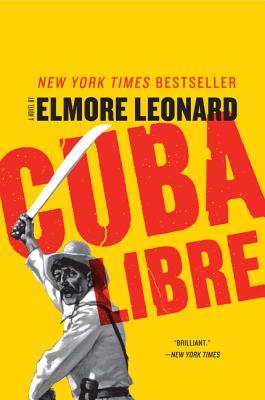 “A wild ride through Cuba during the Spanish-American War.”
—Miami Herald

“Not only his finest novel but one that transcends the limits of its genre and is worthy of being evaluated as literary fiction.”
—Houston Chronicle

Before Grand Master Elmore Leonard earned his well-deserved reputation as “the best writer of crime fiction alive” (Newsweek), he penned some of the finest western fiction to ever appear in print. (The classics Hombre, Valdez is Coming, and 3:10 to Yuma were just a few of his notable works.) With his extraordinary Cuba Libre, Leonard ingeniously combines all of his many talents and delivers a historical adventure/caper/western/noir like none other. The creator of U.S. Marshal Raylan Givens, star of Raylan, Pronto, Riding the Rap, and TV’s Justified, spins a gloriously exciting yarn about an American horse wrangler who escapes a date with a Cuban firing squad to join forces with a powerful sugar baron’s lady looking to make waves and score big in and around Spanish-American War-torn Havana in 1898. Everything you love about Leonard’s fiction—and more—is evident in Cuba Libre. No wonder the New York Times Book Review enthusiastically declared him “a literary genius.”


Praise For Cuba Libre: A Novel…

“The greatest crime writer of our time, perhaps ever!”
— The New York Times Book Review

“An absolute master.”
— The Detroit News