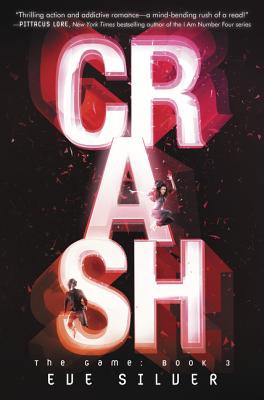 Fans of the 5th Wave series will devour the pulse-pounding conclusion to The Game trilogy, by bestselling author Eve Silver, about teens pulled in and out of an alternate reality where battling aliens is more than a game—it's life and death.

As her dad and best friend lie dying in the hospital, Miki is almost certain the Committee is trying to sabotage her life. The Game is glitching. The missions are more frequent, the alien Drau more deadly, and whatever has been tracking her thoughts more intrusive. The only thing holding Miki together is her boyfriend, Jackson, but somehow telling him how much she needs—and loves—him feels like the most terrifying challenge of all.

Can Miki and Jackson make it through the final mission alive and win the Game before the walls between their alien-fighting nightmares and the real world come crashing down? Or will the world and everyone Miki loves disappear forever?

Crash is the fiercely satisfying conclusion to a trilogy Pittacus Lore, New York Times bestselling author of the I Am Number Four series, raves is packed with "thrilling action and addictive romance—a mind-bending rush of a read!"

“This is a terrific, multifaceted finish to a sci-fi trilogy tailor-made for gamers.”
— Kirkus Reviews

“A fast-paced adventure for science fiction and gaming fans. Crash has all the elements of another teen blockbuster-a strong female protagonist with minor, relatable flaws; a simmering romance; an evil government committee; and a secret resistance society. Fans of Rick Yancey’s The 5th Wave series will devour Crash.
— Voice of Youth Advocates (VOYA)

Praise for PUSH: “This second volume has up-to-the-minute appeal for gamers who like a byte of romance with their sci-fi.”
— Kirkus Reviews

“Readers will love watching Miki grow into herself. She continues to be the highlight of the series; she’s impossible not to like. The thrilling plot, mystery and especially the characters, work to create a novel that readers will once again breathlessly stay up all night to finish.”
— Romantic Times

PRAISE FOR RUSH: “The fight scenes offer unrelenting, pulse-quickening action, and Miki’s personal strugglewith her own need for control, even as she finds herself in an uncontrollable situation, provides the novel with an intriguing emotional core.”
— Bulletin of the Center for Children’s Books

“The intricate, multilayered plot is inventive, twining hostile alien takeover around uncertainty about Miki’s and Jackson’s true heritage and their growing romance....Mind candy for those teen readers who love the thrill of the game.”
— Kirkus Reviews

“Within one chapter, I found myself hooked. The stakes are high, the action is consistent, and there is never too much revealed at once; Silver has a wonderful talent with suspense. . . . Highly Recommended.”-
— CM Magazine