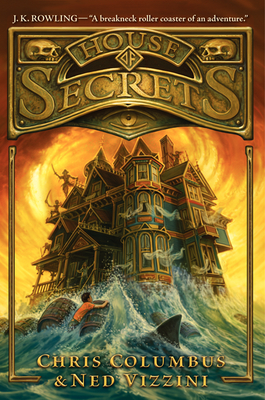 Hailed as “a breakneck, jam-packed roller coaster of an adventure” by J. K. Rowling, this New York Times bestseller is the first installment in the explosive tween fantasy series by famed Hollywood director Chris Columbus (of Harry Potter fame) and bestselling author Ned Vizzini (It’s Kind of a Funny Story).

Siblings Brendan, Eleanor, and Cordelia Walker once had everything they could ever want. But everything changed when Dr. Walker lost his job. Now the family must relocate to an old Victorian house, formerly the home of occult novelist Denver Kristoff—a house that simultaneously feels creepy and too good to be true. By the time the Walkers realize that one of their neighbors has sinister plans for them, they’re banished to a primeval forest way off the grid.

Bloodthirsty medieval warriors patrol the woods around them, supernatural pirates roam the neighboring seas, and a power-hungry queen rules the land. To survive, the siblings will have to be braver than they ever thought possible—and to fight against their darkest impulses. The key may lie in their own connection to the secret Kristoff legacy. But as they unravel that legacy, they’ll discover that it’s not just their family that’s in danger . . . it’s the entire world.


Praise For House of Secrets…

“A breakneck, jam-packed roller coaster of an adventure about the secret power of books, HOUSE OF SECRETS comes complete with three resourceful sibling heroes, a seriously creepy villainess, and barrel loads of fantasy and fear.”
— J.K. Rowling

“A swift-paced…clever page-turner for any reader who has wanted to take part in literary adventures … This story is compelling, great fun, and sure to be popular.”
— ALA Booklist

“The young Walkers are plucky, quick thinkers whom readers will grow to love. With a new adventure that seems to arrive with every chapter, the story unfolds quickly, thus keeping kids hooked and wanting to find out what will happen next.”
— School Library Journal

“The story is an engrossing page-turner with a parade of near-escapes, hilarious mishaps, and courageous face-offs with terrifying villains. The nonstop action will keep readers on the edge of their seats”
— Bulletin of the Center for Children’s Books