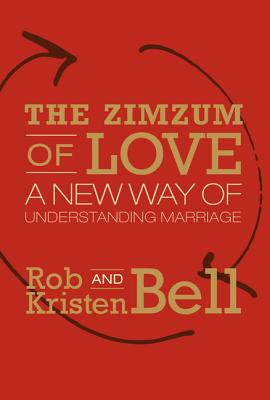 The Zimzum of Love

A New Way of Understanding Marriage

As he revolutionized traditional teaching on hell in the phenomenal New York Times bestseller Love Wins, Rob Bell now transforms how we understand and practice marriage in The Zimzum of Love, co-written with his wife, Kristen.

Despite the divorce statistics, people are still committing to each other, instinctively believing and hoping that theirs is a sacred union that will last forever. Yet when these couples encounter problems, they often lack the resources that keep them connected to this greater mystery surrounding marriage.

Rob and Kristen Bell introduce a startling new way of looking at marriage, The Zimzum of Love. Zimzum is a Hebrew term where God, in order to have a relationship with the world, contracts, creating space for the creation to exist. In marriage, zimzum is the dynamic energy field between two partners, in which each person contracts to allow the other to flourish. Mastering this field, this give and take of energy, is the secret to what makes marriage flourish.

Rob and Kristen Bell are brutally honest about their own struggles, their ups and downs, as together they pass along what matters most for couples. In this wise book, they explore the secret of what makes a happy union—probing the mystery at the heart of the extraordinary emotional connection that binds two people. With his down-to-earth charm, a dose of whimsy, and memorable stories, Rob, writing with his wife Kristen, changes how we consider marriage, providing insight that can help all of us create satisfying and sacred unions of our own.


Praise For The Zimzum of Love: A New Way of Understanding Marriage…

“The Bells wield their heartfelt words and honest voices to cheer on couples of all kinds. . . . This is a ‘feel good’ book, not because it skirts the issues, but precisely because it delves so deeply into them. . . . Married or not, read this book.” — Publishers Weekly (starred review)

“The Bells’ marriage manual... aims to help couples recognize that what they’re creating together is something energetic, light-filled and unknowably deep.” — Guideposts

“The book, rather than giving you a five-point prescription for how to make your marriage work, instead manages to fill you with hope, possibility, and even excitement, for your own relationship.” — Faith Forward, Patheos

Rob Bell is a New York Times bestselling author, speaker, and spiritual teacher. His books include Love Wins, How to Be Here, What We Talk About When We Talk About God, Velvet Elvis, The Zimzum of Love, Sex God, Jesus Wants to Save Christians, and Drops Like Stars. He hosts the weekly podcast The Robcast, which was named by iTunes as one of the best of 2015. He was profiled in The New Yorker and in TIME Magazine as one of 2011’s hundred most influential people. He and his wife, Kristen, have three children and live in Los Angeles.

Kristen Bell is trained as an occupational therapist, cofounded Mars Hill, an innovative church in Grand Rapids, Michigan, and runs the 2Day leadership events. She and Rob live with their three children in Southern California.