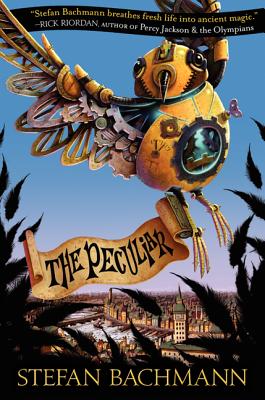 “Mr. Jelliby, a member of Parliament, was too nice a young man to make a good politician. One day, he overheard the powerful Mr. Lickerish order the death of the tenth changeling -- a 'peculiar,' so named because they have the blood of both men and faery. Mr. Lickerish is planning to open a door to the faery world that would destroy London, and only Mr. Jelliby and Bartholomew, a changeling himself, can hope to stop him. Bachman has succeeded in creating a murder mystery, a faery fantasy, and an action adventure that middle-graders and older readers will devour.”
— Karen Briggs, Great Northern Books and Hobbies, Oscoda, MI
View the List

Don't get yourself noticed and you won't get yourself hanged. In the faery slums of Bath, Bartholomew and his little sister Hettie live by these words. Bartholomew and Hettie are Peculiars, and neither faeries nor humans want anything to do with them. But when Peculiars start showing up in London murdered and covered with red tattoos, Bartholomew breaks all the rules and gets himself noticed. Full of magic, dazzling inventions, and intriguing characters such as Mr. Jelliby and Lord Lickerish, this story of friendship, bravery, and nonstop action adventure was hailed by best-selling author Christopher Paolini as "swift, strong, and entertaining. Highly recommended." The Peculiar ends with a spectacular cliff-hanger, and the story concludes in The Whatnot.


Praise For The Peculiar…

“Bachmann’s prose is beautiful, and his story is swift, strong, and entertaining. Highly recommended. I can’t wait to see what Bachmann writes next.” — CHRISTOPHER PAOLINI, #1 New York Times bestselling author of Eragon (The Inheritance Cycle)

“Stefan Bachmann’s sparkling debut is sure to get a lot of well-deserved notice. He breathes fresh life into ancient magic.” — RICK RIORDAN, #1 New York Times bestselling author of The Kane Chronicles and Percy Jackson and The Olympians

“Richly realized . . . accomplished … This is a story young fantasy buffs are sure to enjoy.” — The New York Times Book Review

“An absolute treat for readers of any age.” — Publishers Weekly (starred review)

“Gripping . . . with a wry humor and unusual characters. Fans of Neil Gaiman’s The Graveyard Book (HarperCollins, 2008) and young steampunk enthusiasts will find much here to enjoy.” — School Library Journal

“The Peculiar has the kind of enchantment, whimsy, and utter wonder that stands the test of time. An astounding debut!” — Marie Lu, New York Times best-selling author of the Legend trilogy

Stefan Bachmann was born in Colorado and spent most of his childhood in Switzerland, where he graduated from Zurich University of the Arts with degrees in music composition and theory. He is the author of The Peculiar, his debut, which was published to international acclaim when he was nineteen years old. His other books include The Whatnot and A Drop of Night. www.stefanbachmann.com