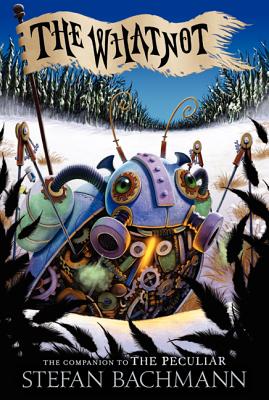 The Whatnot (The Peculiar #2)

The Whatnot is the acclaimed international bestseller and sequel to Stefan Bachmann's riveting debut novel, The Peculiar, which Publishers Weekly called "an absolute treat for readers of any age," and which the Los Angeles Times compared to "Dostoevsky's Crime and Punishment, Charles Dickens's A Tale of Two Cities, and more recent classics, such as J. K. Rowling's Harry Potter and Lemony Snicket's A Series of Unfortunate Events."

Twelve-year-old Pikey Thomas is missing an eye, a family, and friends of any sort. One day, running from bigger boys set on bullying him, Pikey finds himself in front of a grand, beautiful house. There he meets and helps a black-winged faery who is injured. It's a small gesture of kindness and bravery in steam-powered Victorian London, where faeries, now banned, are on the run or imprisoned; where the human armies are preparing for war; and where the changeling Bartholomew Kettle, aided by Arthur Jelliby, still searches for his missing sister, Hettie. This is the epic, dark, imaginative, unforgettable, and ultimately hopeful sequel to Stefan Bachmann's acclaimed debut novel, The Peculiar.

"An enthralling read . . . Bachmann combines the pleasures of a Dickensian cast of characters with the eldritch qualities of British faerie lore and adds a touch of steampunk to entice readers into an alternate universe in which the English are on the verge of war with the fay. The breathtaking beauty of his prose is coupled with a plot that also leaves his audience breathless."—School Library Journal


Praise For The Whatnot (The Peculiar #2)…

“Exhilarating . . . Bachmann writes with a skill that belies his youth . . . and he has a genius for envisioning fairy magic and architecture. . . . Readers will want to start with The Peculiar, and immediately dive into this fine tale.”-
— Publishers Weekly (starred review)

“Enthralling . . . The breathtaking beauty of [Bachmann’s] prose is coupled with a plot that also leaves his audience breathless.”
— School Library Journal

“[A] breathless read, one that will have readers hoping for a peaceful outcome as fervently as its characters do.”
— Kirkus Reviews

Stefan Bachmann was born in Colorado and spent most of his childhood in Switzerland, where he graduated from Zurich University of the Arts with degrees in music composition and theory. He is the author of The Peculiar, his debut, which was published to international acclaim when he was nineteen years old. His other books include The Whatnot and A Drop of Night. www.stefanbachmann.com