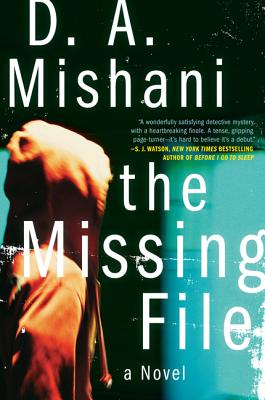 In The Missing File, Israeli detective Avraham Avraham must find a teenage boy gone missing from the suburbs of Tel Aviv in this first volume in a fresh new literary crime series by D. A. Mishani.

Crimes in Avraham’s quiet suburb are generally not all that complex. But when a sixteen-year-old boy goes missing and a schoolteacher offers up a baffling complication, Avraham finds himself questioning everything he thought he knew about his life.

Told through alternating points of view, The Missing File is an emotionally wrought, character-driven page-turner with plenty of twists and turns. It’s a mystery that will leave readers questioning the notions of innocence and guilt, and the nebulous nature of truth.


Praise For The Missing File…

“THE MISSING FILE is a wonderfully satisfying detective mystery, with a heartbreaking finale. A tense, gripping page-turner that I devoured in two days—it’s hard to believe it’s a debut.”
— S.J. Watson, New York Times bestselling author of Before I Go to Sleep

“An outstanding first novel. . . . Mishani puts his expertise in the genre to good use in combining the procedural and the puzzle with artful misdirection.”
— Publishers Weekly (starred review)

“The sense of place here is fascinating, and the focus on Avi’s state of mind, which is plumbed continuously, brings psychological depth. Procedural details are intriguing, too. . . . Armchair-traveler crime aficionados will welcome Mishani’s debut and look forward to Avi’s return.”
— Booklist

“A compelling debut in a complex case aimed straight at the reader’s heart.”
— Kirkus Reviews

“[Mishani] has created a new…memorable…protagonist, Israeli detective Avraham (‘Avi’) Avraham. The translation is smooth, and the twist at the end is so unexpected that it is worthy of a more seasoned novelist. … Recommended
— Theodore Reit, Spinetingler Magazine

“D. A. Mishani’s The Missing File is the first installment of a gripping new crime series.”
— World Literature Today

D. A. Mishani is a literary scholar specializing in the history of detective literature. His first novel, The Missing File, was the inaugural book in his literary crime series featuring the police inspector Avraham Avraham.