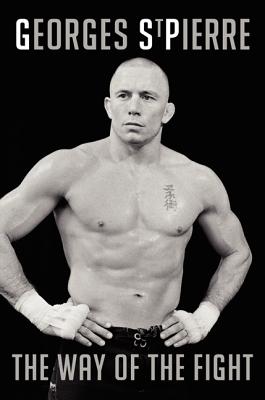 The Way of the Fight

UFC fighter, Georges “Rush” St. Pierre, shares the lessons he learned on his way to the top, in The Way of the Fight, revealing how he overcame bullying and injury to become an internationally celebrated athlete and champion.

The reigning UFC welterweight champion, St. Pierre seemed untouchable until injury derailed him and jeopardized his title and his career. Determined to make his comeback, he embarked on a careful regimen of physical therapy. He also used this healing period to assess his life, where he's been, what he's achieved, where he wants to go, and and lessons that helped shape who he is.

In The Way of the Fight, Canadian championship fighter St. Pierre invites fans into the circle of his life, sharing his most closely guarded memories. A compelling memoir that offers an intimate, gritty look at a fighter’s journey, told through inspiring vignettes, GSP is a moving account of commitment and power, achievement and pain, dedication and conviction from one of the world's greatest champions.


Praise For The Way of the Fight…

“Like St-Pierre, this book is part philosophical, part scientific, part business-tutorial and even part self-help, with carefully selected pieces of the fighter’s personal story interwoven throughout. It’s all fascinating, coming from one of the most evolved fighting minds the sport has ever produced.”
— SportsIllustrated.com

“The Way of the Fight delivers a great deal . . . part biography, part self-help, part philosophy. It is a book that, read in the right manner, teaches more than it tells.”
— Bleacher Report

“An interesting view into the psyche of an athlete . . . the most insightful view to date of a fighter and person that has not only dominated his sport, but has been one of the foundational figures bridging the gap between MMA’s community and the greater mainstream sports audience.”
— Sherdog

“This is an outstanding book . . . at the heart of it The Way of the Fight is about setting and achieving goals, and what it takes to overcome obstacles to become your most successful self. . . I highly recommend The Way of the Fight.”
— New York Times bestselling author Tami Hoag

“GSP the warrior reveals himself. The Way of the Fight is the way of his life. It’s about the process of Georges St-Pierre, who came from nowhere to become an international icon.’’
— Diane Sauvé, Radio-Canada

Georges "Rush" St-Pierre, also known as "GSP," is a Canadian professional mixed martial artist and world champion who holds black belts in both Kyokushin karate and Brazilian Jiu-Jitsu. Recog-nized as one of the planet's best pound-for-pound MMA fighters and all-around athletes, as well as a three-time Canadian Athlete of the Year, GSP lives in Montreal and travels around the world to work with the best coaches and training partners in all disciplines.