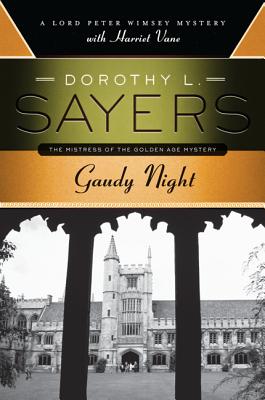 “Gaudy Night stands out even among Miss Sayers’s novels. And Miss Sayers has long stood in a class by herself.” —Times Literary Supplement

The great Dorothy L. Sayers is considered by many to be the premier detective novelist of the Golden Age, and her dashing sleuth, Lord Peter Wimsey, one of mystery fiction’s most enduring and endearing protagonists. Acclaimed author Ruth Rendell has expressed her admiration for Sayers’s work, praising her “great fertility of invention, ingenuity, and wonderful eye for detail.” The third Dorothy L. Sayers classic to feature mystery writer Harriet Vane, Gaudy Night features an introduction by Elizabeth George, herself a crime fiction master. Gaudy Night takes Harriet and her paramour, Lord Peter, to Oxford University, Harriet’s alma mater, for a reunion, only to find themselves the targets of a nightmare of harassment and mysterious, murderous threats.

“Gaudy Night stands out even among Miss Sayers’s novels. And Miss Sayers has long stood in a class by herself.” — Times Literary Supplement (London)

“One of the greatest mystery story writers of this century.” — Los Angeles Times

“So excitingly good in its field, so brilliantly planned and so excellently written, that even the weariest able minds and the jumpiest nerves should react pleasingly to it.” — New York Times

“Dorothy Sayers is in a class by herself.” — Chicago Tribune

“A royal performance.” — The Spectator