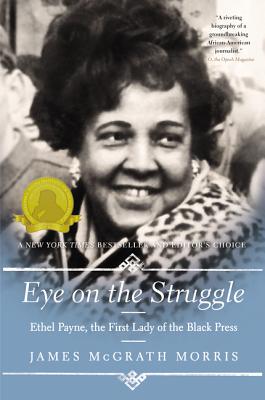 Eye On the Struggle

James McGrath Morris’s groundbreaking biography illuminates the life and accomplishments of pioneering journalist Ethel Lois Payne, and pays tribute to the critical role of the black press in the civil rights era.

A self-proclaimed “instrument for change,” Payne publicly prodded President Dwight D. Eisenhower to support desegregation. From Alabama to Vietnam, from Indonesia to Ghana, her reporting on legislative and judicial civil rights battles enlightened and motivated black readers, for whom she served as an eyewitness on the frontlines of the struggle for freedom. At great personal risk, Payne covered such landmark events as the Montgomery bus boycott, the desegregation of the University of Alabama, the integration of Little Rock’s schools, and the service of black troops in Vietnam. A trailblazing black woman in an industry dominated by white men, Payne also broke the glass ceiling, becoming the first female African-American radio and television commentator on a national network, working for CBS. Inspiring and instructive, moving and enlightening, Eye on the Struggle celebrates this extraordinary woman and her achievements—and reminds us of the power one person has to transform our lives and our world.


Praise For Eye On the Struggle: Ethel Payne, the First Lady of the Black Press…

[An] important and often absorbing new book . . . It’s a deep pleasure to meet Ethel Payne. ‘We are soul folks,’ she declared in 1967, ‘and I am writing for soul brothers’ consumption.’ Her own soul beams from this book. — New York Times

“A riveting biography of a groundbreaking African American journalist . . . In James McGrath Morris’s compelling biography Eye on the Struggle, this ‘first lady of the black press’ finally gets her due.” — O, the Oprah Magazine

“Afast-paced tour through the highlights of 20th-century African-American history, with Payne as witness.” — Boston Globe

“It is through Payne’s eyes that author James McGrath Morris deftly shows us the history of post-World War II America.” — Minneapolis Star Tribune

Ethel Payne was a pioneer who experienced the challenges but little of the glory that comes with the title. With this book, her legacy is assured. — Paula J. Giddings, author of Ida, A Sword Among Lions: Ida B. Wells and the Campaign Against Lynching

“James McGrath Morris’s eloquent book - quite a feat of historical excavation into the black press as well - should bring her many new admirers.” — Wil Haygood, author of the bestselling,The Butler: A Witness to History

In Eye on the Struggle James McGrath Morris lifts Ethel Payne from relative obscurity revealing a fearless, intrepid journalist who covered practically every important event of her day, whether at home in the heat of the civil rights movement or traveling abroad to Africa and Asia. ” — Herb Boyd, author of Brotherman and Baldwin's Harlem

“A debt of gratitude is due James McGrath Morris for bringing the remarkable life of Ethel Payne out of the shadows.” — Pamela Newkirk, author of,Spectacle: The Astonishing Life of Ota Benga

The rich use of sources and glimpses of Payne’s personal life will engage readers interested in civil rights, journalism, and women’s history.” — Library Journal

“Besides reclaiming an important figure in American journalism, Eyes on the Struggle offers historical context for the journalistic role that alternative media play in current civil rights movements. . . His quest not only recounts a storied life but also reminds readers of the historic centrality of alternative media in social change.” — Journal of American History

“A well-researched, detailed look at the life of a pioneering journalist.” — The Washington Independent Review of Books

“Morris is not only insightful, but also wise…” — Dallas Morning News

“Biographer James McGrath Morris pulls back the curtain on an often overlooked figure of the civil rights movement with Eye on the Struggle: Ethel Payne, the First Lady of the Black Press.” — Fort Worth Star-Telegram