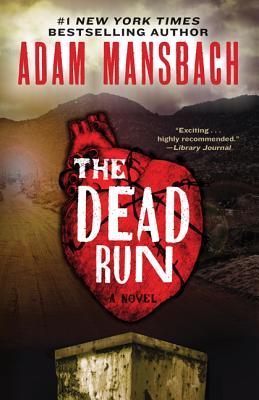 With thrilling chills and crackling suspense, The Dead Run is an edgy novel set in the netherworld of the Mexican-American border from Adam Mansbach, the #1 New York Times bestselling author of Go the F**ck to Sleep and Rage Is Back.

On both sides of the border, girls are going missing and bodies are beginning to surface. It’s a deadly epidemic of crime that plunges a small-town police chief into a monster of an investigation he's not equipped to handle. An ancient evil has returned, and now everyone—the innocent and the guilty—must face their deepest terrors.

With The Dead Run Adam Mansbach delivers an eerie high-concept thriller, mixing horror, the supernatural, and suspense in a chilling, high-octane read.

Praise For The Dead Run: A Novel (Jess Galvan #1)…

“An exciting tale, an action thriller heavily infused with paranormal elements ... The narrative twists among several disparate protagonists and keeps a lot of balls in the air without losing momentum. Highly recommended for readers of supernatural action and horror ... and fans of more general action stories.”
— Library Journal

“Both surreal and grounded in harsh reality, the novel is ambitiously plotted and powerfully written.”
— Booklist

“A taut and gritty adventure thriller with a supernatural element.”
— Publishers Weekly

“Although violent, The Dead Run is first-rate entertainment based on a fascinating cultural mashup.”
— Seattle Post-Intelligencer

Praise for Adam Mansbach: “Mansbach has a talent for writing full, memorable characters that seem untidy and complex. The prose crackles with insight.”
— San Francisco Chronicle

“One of the most ambitious, insightful, and daring writers of our generation.”
— Jeff Chang

“Nothing has driven home a certain truth about my generation quite like this.”
— New Yorker

“One of the best thriller/horror hybrids to come along this year. ... a lean, intoxicating funhouse of a book that is difficult to put down.”
— Fearnet.com