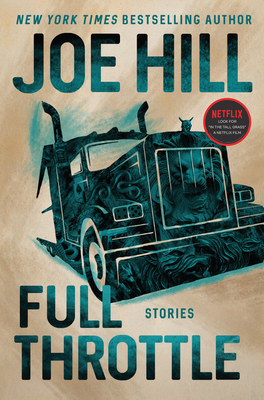 “Master of horror Joe Hill is back with more short stories that will thrill you to your core. Plunging into the murky depths of human nature, Hill’s book shows readers that sometimes the things that truly scare us can ignite from the simplest of sparks. You will be ripped from the comfort of your reality and forced to survive a book that sinks its rusted hooks deep.”
— Kelli O'Malley, Boswell Book Company, Milwaukee, WI
View the List

“This collection cements Hill’s reputation as a versatile master of scares both subtle and shocking.” — Publishers Weekly [starred review]

“Hill’s latest collection of short stories is compulsively readable. Thirteen stories weave in and out of gritty realism, whimsical folklore, and futuristic sf, flowing from one to the next in a fast-paced journey through the surreal. Hill fills each story with shocking plot twists, excellent worldbuilding, and satisfying kismet.” — Library Journal

" Hill is a versatile talent, and this kaleidoscopic collection whirls from crime premises that sound like they could be out of a hardboiled noir, to lyrical and magical-realist works dripping with atmosphere and impressive visuals, to midwestern gothic nightmares straight out of the ’70s horror heyday. Across them all, Hill’s clear voice and talent rings through loud and clear." — barnesandnoble.com

“Full Throttle is a great collection and just more proof that Hill is one of the great storytellers of the early 21st century. Highly recommended.” — SFF World

“This new collection of short fiction by acclaimed horror and suspense writer Joe Hill proves that Hill can do it all.” — CrimeReads

“A four-pack of mayhem in this sparkling collection of short novels. . . .Worth waiting in line for, if you’re a Hill fan. If you’re not, this is the book to turn you into one.” — Kirkus Reviews (starred review) on STRANGE WEATHER

“Every piece is driven by anxiety and unease and feature Hill’s trademark characters who feel absolutely real. But it is also the sense of place that dazzles, whether it’s a sinister version of Narnia in ‘Faun,’ on a coastal pier in ‘Dark Carousel,’ or on a plane as WWIII breaks out in ‘You Are Released.’ Hill lulls the reader into deep enjoyment, even as the terror lies just around the corner.” — Library Journal [starred review]

“[I]n times like these, when real-world terrors outstrip our night terrors, how can a novelist possibly compete? Joe Hill, the author of several terrifying bestsellers, rises to this challenge in Strange Weather.” — Washington Post on STRANGE WEATHER

“[A]nother must-read from a increasingly impressive storyteller [...] Strange Weather speaks to the versatility of Joe Hill’s craft, telling deeply disturbing stories in which cataclysmic forces of nature seem like a gentle rain when set against the actions of villains who are all too human.” — barnesandnoble.com on STRANGE WEATHER

“The Weather quartet unleashes a perfect storm of styles, from a slow-burn thriller to ethereal sci-fi, all told with a consistently strong voice…. Hill whips up emotional moments in all four that strike like lightning and thunderously rumble your soul.” — USA Today on STRANGE WEATHER

“[A] superb supernatural thriller . . . a tremendous, heartrending epic of bravery and love set in a fully realized and terrifying apocalyptic world, where hope lies in the simplest of gestures and the fullest of hearts.” — Publishers Weekly (starred review) on THE FIREMAN

“A genuinely scary novel filled with people you care about; the kind of book that still stays in your mind after you’ve turned over the final page. I loved it unreservedly.” — Neil Gaiman on HEART-SHAPED BOX

“[O]ne of the best [horror] collections of the year.” — Locus on 20th CENTURY GHOSTS