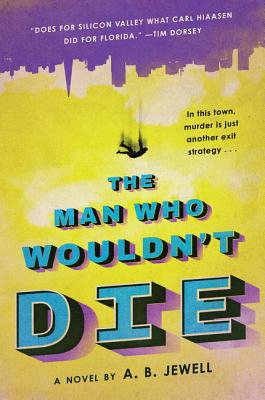 The Man Who Wouldn't Die

“DOES FOR SILICON VALLEY WHAT CARL HIAASEN DID FOR FLORIDA.” —Tim Dorsey

Silicon Valley scion Captain Don Donogue is dead under mysterious circumstances. In fact, he might’ve well have been murdered. Just ask Captain Don himself. He’s been sending messages about his suspicious death from beyond the grave. Yep, he’s been tweeting from the afterlife. Or so it seems.

Could life-after-death be Silicon Valley’s latest innovation? Our bodies die but our souls and social media accounts are eternal? This is the mystery that confronts the only sane person left in a region gone mad with greed, William Fitzgerald. Fitch. He’s a world-class detective, tough, stoic, carries a big fist and a flip phone. He’s a bad fit for Silicon Valley, where the law firms have drive-thru windows manned by barristeristas (who serve instant coffee and instant patents); attractive women aren’t MILF’s but TELFs (Tech Executives I’d Like To Fund); and couples are so anxious to get into the best free-play kindergartens that they get on the waiting list as soon as they freeze their sperm and eggs for later use.

One day, a woman knocks on Fitch’s door. She’s got a handful of cash and a wild story: She says that her father was Captain Don, or is Captain Don. He was killed, or maybe not. He’s tweeting from beyond. Fitch takes the case and goes into the belly of the valley, discovering that life and death, well, sometimes they’re just another transaction….

Original, clever, and hysterical, The Man Who Wouldn’t Die is the Carl Hiaasen of Silicon Valley and neo-noir at its unforgettable best.


Praise For The Man Who Wouldn't Die: A Novel…

“The Man Who Wouldn’t Die does for Silicon Valley what Carl Hiaasen did for Florida, which is rollicking fun if you’d like your future to be a dystopia of terabytes. I’ll be first in line, or online, or retina scan, to get A.B. Jewell’s next installment.” — Tim Dorsey, New York Times Bestselling Author

“If Philip Marlowe was a standup comic he might sound something like Fitch, the wisecracking, tech-savvy PI in this funny and twisted rejiggering of the classic detective novel. Think Silicon Valley meets The Big Sleep.” — Mark Haskell Smith, author of Blown

“A rambunctious Valley takedown comedy-thriller that lampoons the self-serious preening of the digerati.” — San Francisco Chronicle

“Forever Man is Dashiell Hammett 2.0, Raymond Chandler with emojis, James M. Cain after a trip to the Apple Store: The classic hardboiled detective novel, updated for 21st Century Silicon Valley and made hilarious. Even if you’ve read every P.I. novel out there, you’ve never read one like this before.” — Brad Parks, Shamus Award-winning author of Closer Than You Know

“Stuffed with so much invention. … A Hiaasen-esque farce.” — Kirkus Reviews

“Silicon Valley’s next great detective novel (maybe its only one!), The Man Who Wouldn’t Die is hilarious. Get this great read, a perfecto takedown of our self-absorbed land, which is also a perfect summer read.” — Kara Swisher

“The pseudonymous Jewell takes an amusing swipe at the hardboiled detective novel and the world of high tech in his fun debut…. Sharp, satirical observations on tech-dependent society and eccentrically comic characters keep the action moving. Jewell is off to a promising start.” — Publishers Weekly

A. B. Jewell is the pseudonym for a Pulitzer Prize–winning technology reporter. He lives in San Francisco.