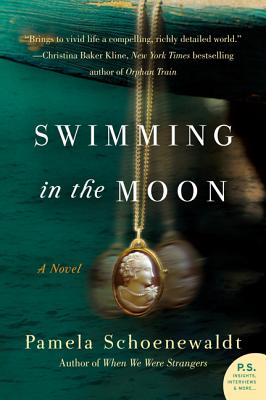 Swimming in the Moon (Paperback)

A new historical novel from Pamela Schoenewaldt, the USA Today bestselling author of When We Were Strangers.

Italy, 1905. Fourteen-year-old Lucia and her young mother, Teresa, are servants in a magnificent villa on the Bay of Naples, where Teresa soothes their unhappy mistress with song. But volatile tempers force them to flee, exchanging their warm, gilded cage for the cold winds off Lake Erie and Cleveland's restless immigrant quarters.

With a voice as soaring and varied as her moods, Teresa transforms herself into the Naples Nightingale on the vaudeville circuit. Clever and hardworking, Lucia blossoms in school until her mother's demons return, fracturing Lucia's dreams.

Yet Lucia is not alone in her struggle for a better life. All around her, friends and neighbors, new Americans, are demanding decent wages and working conditions. Lucia joins their battle, confronting risks and opportunities that will transform her and her world in ways she never imagined.

Pamela Schoenewaldt is the USA Today bestselling author of When We Were Strangers and Swimming in the Moon. Her short stories have appeared in literary magazines in England, France, Italy, and the United States. She taught writing for the University of Maryland, European Division, and the University of Tennessee.


Praise For Swimming in the Moon: A Novel…

“Lush with historical detail, Swimming in the Moon celebrates the power of the mother-daughter relationship. Pamela Schoenewaldt delivers another novel full of richly realized characters, who transport us to the immigrant neighborhoods of early twentieth century America.”
— Jessica Brockmole, author of Letters from Skye

“A must read for anyone who enjoys beautiful, richly drawn characters, and a historical setting so realistic that one would believe they had been transported to another time. A glorious, unforgettable novel, A+.”
— Pittsburg Examiner
or
Not Currently Available for Direct Purchase
Copyright © 2020 American Booksellers Association