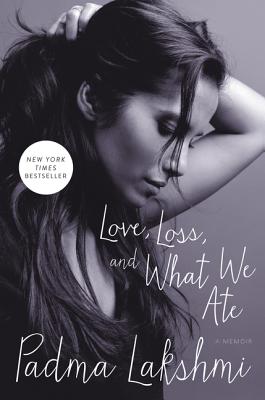 Love, Loss, and What We Ate

A vivid memoir of food and family, survival and triumph, Love, Loss, and What We Ate traces the arc of Padma Lakshmi’s unlikely path from an immigrant childhood to a complicated life in front of the camera—a tantalizing blend of Ruth Reichl’s Tender at the Bone and Nora Ephron’s Heartburn

Long before Padma Lakshmi ever stepped onto a television set, she learned that how we eat is an extension of how we love, how we comfort, how we forge a sense of home—and how we taste the world as we navigate our way through it. Shuttling between continents as a child, she lived a life of dislocation that would become habit as an adult, never quite at home in the world. And yet, through all her travels, her favorite food remained the simple rice she first ate sitting on the cool floor of her grandmother’s kitchen in South India.

Poignant and surprising, Love, Loss, and What We Ate is Lakshmi’s extraordinary account of her journey from that humble kitchen, ruled by ferocious and unforgettable women, to the judges’ table of Top Chef and beyond. It chronicles the fierce devotion of the remarkable people who shaped her along the way, from her headstrong mother who flouted conservative Indian convention to make a life in New York, to her Brahmin grandfather—a brilliant engineer with an irrepressible sweet tooth—to the man seemingly wrong for her in every way who proved to be her truest ally. A memoir rich with sensual prose and punctuated with evocative recipes, it is alive with the scents, tastes, and textures of a life that spans complex geographies both internal and external.

Love, Loss, and What We Ate is an intimate and unexpected story of food and family—both the ones we are born to and the ones we create—and their enduring legacies.


Praise For Love, Loss, and What We Ate: A Memoir…

“Startlingly honest… Not only is it a deeply revealing and personal book, but an evocative one filled with lovely turns of phrase.”
— Daily Beast

“[An] appealing new memoir...The savoring of meals and snacks can be described as evocatively as the preparation.”
— USA Today

“An absorbing memoir… An intimate, revealing portrait, far different from the woman blazoned in the tabloids.”
— Kirkus Reviews

“[A] substantial and edgy memoir, LOVE, LOSS, AND WHAT WE ATE, stands out amid the ebb and flow of today’s global celebrity-consciousness as the work of someone seriously dedicated to multiple achievements…. This is a true gem of a memoir for reading, tasting, sharing and learning.”
— Book Reporter

“There is more to the memoir than Lakshmi’s turbulent personal life. She also writes lovingly of her mother and extended maternal family in India.”
— Los Angeles Times

Padma Lakshmi is the Emmy-nominated host of the highly rated and critically acclaimed, Emmy-winning Bravo seriesTop Chef, and the author of three cookbooks and food titles: the award-winning Easy Exotic; Tangy, Tart, Hot & Sweet; and the Enclyclopedia of Spices and Herbs. In addition to her culinary achievements, Lakshmi has contributed to such magazines as Vogue, Gourmet, and Harper's Bazaar (UK and US), and penned a syndicated column on fashion and food for the New York Times. Her television-hosting credits include Planet Food and Padma's Passport, as well as other programs in the United States and abroad. A global style icon and the first internationally successful Indian supermodel, Lakshmi also helms companies of her own such as the Padma Collection and Easy Exotic.

Lakshmi is a cofounder of the Endometriosis Foundation of America. Since 2009, the organization has advocated for early diagnosis, promoted research, and raised awareness in the medical community and the greater public about this devastating chronic disease which affects over 190 million women worldwide.

She lives in New York City with her daughter.