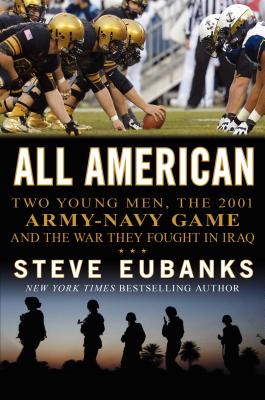 Two Young Men, the 2001 Army-Navy Game and the War They Fought in Iraq

All American is Steve Eubanks inspiring story of two football rivals who faced each other in the momentous 2001 Army-Navy Game who would both go on to serve in the United States military in the Iraq War.

In December, 2001, as fires still burned beneath the World Trade Center ruins, West Point cadet Chad Jenkins and Naval Academy midshipman Brian Stann faced off at Veterans Stadium in Philadelphia in what would become the most-watched college football game of the decade: the matchup between the Army Black Knights and the Navy Midshipmen.

With his team down by thirteen points, Stann, a Navy linebacker, came into contact with Jenkins, the Army quarterback, for the first time, landing a perfect tackle. Though these two players would not meet again for another decade, Stann and Jenkins shared the same path: both went to war, led soldiers, and witnessed and participated in events they never imagined possible.

A moving and fascinating dual profile of honor, duty, courage, and competition, illustrated with photos, All American is a thoughtful exploration of American character and values, embodied in the lives of two remarkable young men.

Steve Eubanks is a New York Times bestselling author and award-winning writer whose work has appeared in Sports Illustrated, Golf Digest, Garden & Gun, and USA Today, and on FoxSports.com, Yahoo!, and PGATour.com. A former college golfer and PGA club pro, he is the author of more than thirty books. He lives in Peachtree City, Georgia, with his wife and children.


Praise For All American: Two Young Men, the 2001 Army-Navy Game and the War They Fought in Iraq…

“There are two stories in American life—how we play, how we fight. Steve Eubanks tells a masterful story about both, along with a story of two extraordinary people, from two extraordinary institutions, moving through extraordinary times. All American is... inspiring... It’s history lived from the inside.”
— DAVID LIPSKY, author of the New York Times bestseller Absolutely American: Four Years at West Point

“The people who went to [service] academies embody words like ‘hero’ and ‘courageous.’ Steve Eubanks captures that courage perfectly in this book by showing the dedication, honor, and love for each other and for our country that are inherent in academy graduates.”
— Hall of Fame Coach Lou Holtz

There is nothing like Army-Navy... The young men who play... have all volunteered to die for their country... [Eubanks] tells you how special you have to be to play in this game--and to... make the kinds of sacrifices no other athletes even think about making...”
— John Feinstein, author of A Civil War

“All American... is a masterpiece. ... A most noteworthy book.”
— Epoch Times