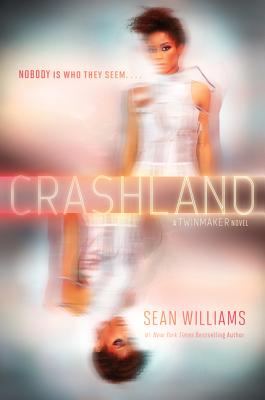 Clair and Jesse have barely been reunited when the world is plunged into its biggest crisis since the Water Wars. The d-mat network is broken. The world has ground to a halt. People are trapped, injured, dying. It's the end of the world as Clair knows it—and it's partly her fault. Now she's been enlisted to track down her friend Q, the rogue AI who repeatedly saved her life—and who is the key to fixing the system. Targeted by dupes, abandoned by her friends, and caught in a web of lies that strike at the very essence of who she is, Clair quickly finds powerful and dangerous allies. But if she helps them, will she be leading her friend straight into a trap? Caught between pro- and anti-d-mat philosophies, in a world on the brink of all-out war, Clair must decide where she stands—and who she stands with, at the end.

“[There are] some knife-in-the-gut twists and a gasp-inducing ending.”
— Kirkus Reviews

Praise for TWINMAKER: “In the masterful hands of Williams, the technology, which has eerie parallels to contemporary life, provides a solid platform for great storytelling, and teens will revel in the drama, Clair’s tenacity, and the memorable characters who discover that their utopia isn’t all it’s cracked up to be.”
— Booklist (starred review)

Praise for TWINMAKER: “TWINMAKER took my breath away. A triumph of thrilling action and vivid imagination.”
— Alison Goodman, author of EON and EONA

Praise for TWINMAKER: “TWINMAKER asks smart questions without easy answers, and presents a future so simultaneously wonderful and terrible you can only believe in it. A thrilling, existential head trip worthy of my favorite anime, I couldn’t stop reading this book. More importantly, I couldn’t stop thinking about it.”
— Garth Nix, author of the Old Kingdom series

Sean Williams is a #1 New York Times bestselling writer for adults and the author of Twinmaker and Crashland, as well as coauthor of the Troubletwisters series with Garth Nix. As a resident of South Australia—which he reports is a lovely place a long way away from the rest of the world—Sean has often dreamed of stepping into a booth and being somewhere else, instantly. This has led to a fascination with the social, psychological, and moral implications of such technology. When not pondering such weighty matters, Sean can generally be found eating chocolate (actually, he eats chocolate when pondering these matters, too).