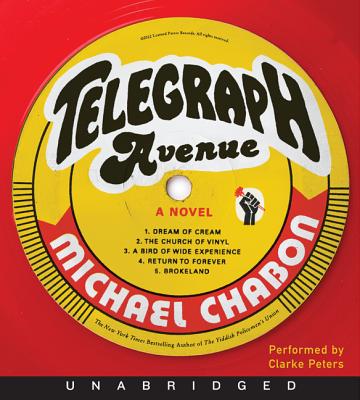 As the summer of 2004 draws to a close, Archy Stallings and Nat Jaffe are still hanging in there — longtime friends, bandmates, and co-regents of Brokeland Records, a kingdom of used vinyl located in the borderlands of Berkeley and Oakland. Their wives, Gwen Shanks and Aviva Roth-Jaffe, are the Berkeley Birth Partners, a pair of semi-legendary midwives who have welcomed, between them, more than a thousand newly minted citizens into the dented utopia at whose heart—half tavern, half temple—stands Brokeland Records.

When ex-NFL quarterback Gibson Goode, the fifth-richest black man in the United States, announces plans to build his latest Dogpile megastore on a nearby stretch of Telegraph Avenue, Nat and Archy fear it means certain doom for their vulnerable little enterprise. Meanwhile, Aviva and Gwen also find themselves caught up in a battle for their professional existence, one that tests the limits of their friendship. Adding another layer of complication to the couples' already tangled lives is the surprise appearance of Titus Joyner, the teenage son Archy has never acknowledged and the love of fifteen-year-old Julius Jaffe's life.

“An amazingly rich, emotionally detailed story….[Chabon’s] people become so real to us, their problems so palpably netted in the author’s buoyant, expressionistic prose, that the novel gradually becomes a genuinely immersive experience—something increasingly rare in our ADD age.”
-Michiko Kakutani, New York Times

“Chabon is an extraordinarily generous writer. He is generous to his characters, to his landscapes, to syntax, to words, to his readers—there is a real joy in his work….Both ambitious and lighthearted, the novel is a touching, gentle, comic meditation.”
-Cathleen Schine, New York Review of Books

“Forget Joycean or Bellovian or any other authorial allusion. Telegraph Avenue might best be described as Chabonesque. Exuberantly written, generously peopled, its sentences go off like a summer fireworks show, in strings of bursting metaphor.”
-Jess Walter, San Francisco Chronicle

“The writing - stylized, humorous and often dazzling - is inflected with tones of jazz and funk. But it’s Chabon’s ear for the sounds of the human soul that make this book a masterpiece, as his vividly drawn characters learn to live at the intersection of disappointment and hope.”
-Robin Micheli, People (4 out of 4 stars)

“Telegraph Avenue is so exuberant, it’s as if Michael Chabon has pulled joy from the air and squeezed it into the shape of words....His sentences spring, bounce, set off sparklers, even when dwelling in mundane details….Fantastic.”
-Carolyn Kellogg, Los Angeles Times Book Review

“Witty and compassionate and full of more linguistic derring-do than any other writer in American could carry off.”
-Ron Charles, Washington Post