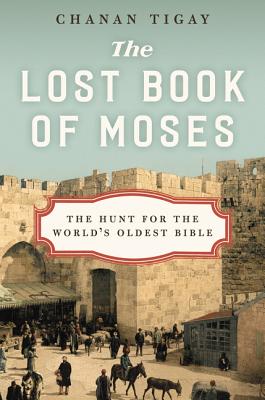 The Lost Book of Moses

The Hunt for the World's Oldest Bible

One man’s quest to find the oldest Bible scrolls in the world and uncover the story of the brilliant, doomed antiquarian accused of forging them.

In the summer of 1883, Moses Wilhelm Shapira—archaeological treasure hunter and inveterate social climber—showed up unannounced in London claiming to have discovered the oldest copy of the Bible in the world.

But before the museum could pony up his £1 million asking price for the scrolls—which discovery called into question the divine authorship of the scriptures—Shapira’s nemesis, the French archaeologist Charles Clermont-Ganneau, denounced the manuscripts, turning the public against him. Distraught over this humiliating public rebuke, Shapira fled to the Netherlands and committed suicide.

Then, in 1947 the Dead Sea Scrolls were discovered. Noting the similarities between these and Shapira’s scrolls, scholars made efforts to re-examine Shapira’s case, but it was too late: the primary piece of evidence, the parchment scrolls themselves had mysteriously vanished.

Tigay, journalist and son of a renowned Biblical scholar, was galvanized by this peculiar story and this indecipherable man, and became determined to find the scrolls. He sets out on a quest that takes him to Australia, England, Holland, Germany where he meets Shapira’s still aggrieved descendants and Jerusalem where Shapira is still referred to in the present tense as a “Naughty boy”. He wades into museum storerooms, musty English attics, and even the Jordanian gorge where the scrolls were said to have been found all in a tireless effort to uncover the truth about the scrolls and about Shapira, himself.

At once historical drama and modern-day mystery, The Lost Book of Moses explores the nineteenth-century disappearance of Shapira’s scrolls and Tigay's globetrotting hunt for the ancient manuscript. As it follows Tigay’s trail to the truth, the book brings to light a flamboyant, romantic, devious, and ultimately tragic personality in a story that vibrates with the suspense of a classic detective tale.


Praise For The Lost Book of Moses: The Hunt for the World's Oldest Bible…

“Extremely enjoyable. . . . It will delight anyone who finds religion or its history even remotely arresting. At once a mystery and a historical yarn, Mr. Tigay’s book is also a reminder that humor and a real sense of fun can enliven a serious piece of work.”
— Wall Street Journal

“A rollicking tale all its own, The Lost Book of Moses is a page-turning adventure that will engross proof-seeking readers everywhere.”
— San Francisco Chroncile

“The heart of Tigay’s book is a gripping account of his quest… This admirably researched book offers a fine occasion to understand Shapira as a product of a modern fetish for authenticity and a rivalry between European nation-states obsessed not just with colonial expansion but with their own origins.”
— Haaretz

“Tigay’s fascination with this obscure mystery is infectious, and his writing is crisp and lively. Tigay keeps the reader in suspense until the very end… Indeed, John Le Carré would be hard pressed to devise such a tantalizing mystery or a more complex leading man.”
— Christian Science Monitor

“Tigay has constructed a thrilling and suspenseful true story of lost antiquities and intrepid modern investigations, managing to mine this tale for realistic entertainment more worthy of Indiana Jones than most Raiders sequels… This book’s reality puts such fictions as Dan Brown’s The Da Vinci Code to shame.”
— Winnipeg Free Press

“Not only does [Tigay] solve the mystery of the scrolls, he also develops a deeper acquaintance with Shapira, who turns out to have been a remarkable character. It is fair to say that Shapira left a complicated legacy, and that the indefatigable Tigay gives it its due.”
— The Forward

“Tigay’s narration, juxtaposed against Shapira’s life and times, is as much a personal journey as it is a quest for an artifact; getting to know him is almost as interesting as learning about Shapira. Readers captivated by the romance of biblical archaeology will find much fascinating material here.”
— Booklist

“A dynamic and satisfying account of a strange, remarkable man whose discovery could turn the world of biblical scholarship on its head.”
— Publishers Weekly

“an intriguing and wide-ranging tale. . . . A work of broad appeal, for the history buff and mystery lover alike.
— Kirkus (starred review)

“Chanan Tigay has written a delight of a book—a mysterious treasure, an ossuary of Abrahamic secrets that surfaced once and disappeared. Tigay takes us on a gripping personal quest and plunges into the uncertainties of ancient scripture and a tour of the murky underworld of artifact thieves, forgers, and traders.”
— T. J. Stiles, winner of the Pulitzer Prize and the National Book Award, and author of Custer's Trials: A Life on the Frontier of a New America

“Who would have thought that this tale of manuscripts, scrolls and notebooks could be such an engrossing one? Chanan Tigay tells a good story, and evokes the characters at its center to bring a fascinating piece of history to life.”
— Adam Hochschild, finalist for the National Book Award and author of King Leopold's Ghost and To End All Wars

“A enthralling historical mystery. . . . Tigay unfolds a compelling narrative of passions, delusions, deceptions and death, an epic of frailties and faith worthy of the Old Testament itself. The Lost Book of Moses marks the auspicious debut of an assured researcher and gifted storyteller. ”
— Jason Roberts, National Book Critics Circle Finalist, A Sense of the World

“The Lost Book of Moses is masterfully told, shot through with wit and insight and infused with deep knowledge of Biblical scripture. This book will appeal not only to enthusiasts of antiquity and the birth of the Judeo-Christian tradition, but to all who love a well-crafted mystery.”
— Scott Wallace, author of The Unconquered: In Search of the Amazon's Last Uncontacted Tribes

“In The Lost Book of Moses, Chanan Tigay takes a fascinating headfirst dive into a cadre of obsessives pursuing a lost treasure linked to one of the great, elusive, and possibly criminal figures of early biblical archaeology. Years of international detective work have produced a saga of faith and fraud.”
— Matti Friedman, author of The Aleppo Codex

“Chanan Tigay writes with the grand historical perspective of Erik Larson, the addictive storytelling of Simon Winchester, and the penetrating insight of Sebastian Junger. The Lost Book of Moses is an amazing story told by a writer of formidable talent.”
— Justin St. Germain, author of Son of a Gun

“With the skill and awareness of a Conan Doyle we are taken on a journey by a master storyteller that turns a historical investigation into a detective yarn. Narrative artistry magnifies it, and like so many investigative stories the answers were hiding all along in plain sight. ”
— Lowell Bergman, winner of the Pulitzer Prize, producer/correspondent for PBS Frontline, and former 60 Minutes producer.

Chanan Tigay is an award-winning journalist who has covered the Middle East, 9/11, and the United Nations for numerous magazines, newspapers, and wires. Born in Jerusalem, Tigay holds degrees from Columbia University and the University of Pennsylvania and was a recent Investigative Reporting Fellow at UC Berkeley. He is a professor of Creative Writing at San Francisco State University.