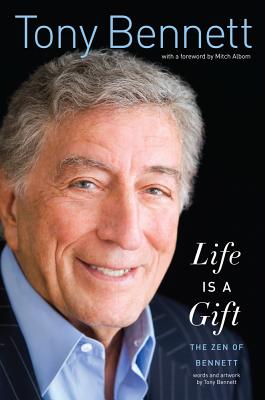 Life Is a Gift (Hardcover)

The Zen of Bennett

One of the most well-known and beloved vocalists of our time, Tony Bennett is an American icon. Now, in this rich and beautiful memoir, the legendary Grammy and Emmy Award–winning singer takes us behind the scenes of his multi-platinum career. Revealing, insightful, and always moving, Life Is a Gift tells the stories of Bennett’s experiences in the music industry, what he learned, and who he met along the way, including Frank Sinatra, Nat King Cole, Ella Fitzgerald, Aretha Franklin, and Duke Ellington, as well as Amy Winehouse, John Mayer, and Lady Gaga. A "master class in life," this revealing retrospective offers an intimate look at Tony Bennett's journey, from growing up during the Great Depression to carving a career in popular music that has spanned more than six decades as his popularity among all generations continues to grow.


Praise For Life Is a Gift: The Zen of Bennett…

“Writing in the same style as he sings… Bennett shares countless tales about showbiz, his famous friends, his family, and his artistic career… he remains Zen-like in his delivery… Bennett’s tips for happiness, success, and longevity are like music to the ears.”
— Publishers Weekly

“In many ways, Bennett’s story reads like a classic American novel…Like the Zen principles he advocates, Bennett writes in simple, plain prose….revealing stories that define his path and unique perspective… readers can almost hear his distinctive cadence as he waxes nostalgic…celebrity and career anecdotes will likely appeal to fans.”
— Lisa Ko, author of The Leavers

“Bennett’s career has had a peerless longevity and has likely provided him with wisdom and anecdotes for two or three books of this nature…there is…a great deal of wisdom in the [Zen] suggestions at the close of each chapter when they stem directly from Bennett’s own richly lived life.”
— Kirkus Reviews