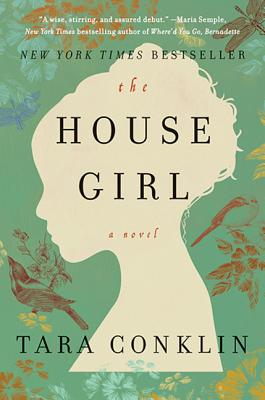 Weaving together the story of an escaped slave in the pre–Civil War South and a determined junior lawyer, The House Girl follows Lina Sparrow as she looks for an appropriate lead plaintiff in a lawsuit seeking compensation for families of slaves. In her research, she learns about Lu Anne Bell, a renowned prewar artist whose famous works might have actually been painted by her slave, Josephine.

“Assured and arresting...You cannot put it down.””
— Chicago Tribune

It’s shelved under historical fiction, but THE HOUSE GIRL reads more like a historical whodunit, and a smart one at that . . . Both Josephine and Lina are intricately drawn characters — fierce, flawed and very real.”
— Minneapolis Star Tribune

“[G]rabs you by the bonnet strings and starts running.”
— Entertainment Weekly

“Conklin ... is a skilled writer ... who knows how to craft a thoughtful page-turner ...We’re glued to the pages.”
— Seattle Times

“A sorrowful, engrossing novel in which the pursuit of justice serves as a catalyst to a more personal pursuit for truth . . . Through Josephine and Lina’s journeys, THE HOUSE GIRL is also a meditation on motherhood, feminism, loss, and, ultimately, redemption.”
— Pittsburgh Post-Gazette

“Conklin’s research blends subtly into the background while successfully rendering a picture of the complex tensions inherent in 1850s society...A historical novel that succeeds in giving voice to the voiceless.”
— Winnipeg Free Press

“Skillfully executed and packed with surprises, this novel of the ways in which art saves our humanity is an engrossing do-not-miss adventure.”
— Shelf Awareness

“Conklin’s sensitive, deft handling of complex racial and cultural issues, as well as her creation of a complicated, engaging story make this book destined to be a contender for best of 2013.”
— School Library Journal (starred review)

“A seamless juxtaposition of past and present, of the lives of two women, and of the redemptive nature of art and the search for truth and justice. Guaranteed to keep readers up long past their bedtimes.”
— Library Journal (starred review)

“Luminous . . . The rare novel that seamlessly toggles between centuries and characters and remains consistently gripping throughout . . . Powerful.”
— BookPage

“Infused with ominous atmosphere and evocative detail...a dramatic montage of narrative and personal testimonies that depicts the grotesque routines of the slave trade, the deadly risks of the Underground Railroad and the impossible choices that slaves and abolitionists faced.”
— Washington Post

“Conklin persuasively intertwines the stories of two women separated by time and circumstances but united by a quest for justice...Stretching back and forth across time and geography, this riveting tale is bolstered by some powerful universal truths.”
— Booklist

“Rich and surprising...will make hearts ache yet again for those who suffered through slavery as well as cheer for those--Conklin and Lina--who illuminate their stories.”
— Cleveland Plain Dealer

“Tara Conklin’s wise, stirring and assured debut tells the story of two extraordinary women, living a century apart, but joined by their ferocity of spirit. From page one, I fell under the spell of THE HOUSE GIRL’s sensuous prose and was frantically turning pages until its thrilling conclusion.”
— Maria Semple, author of Where'd You Go, Bernadette

“The House Girl is a heartbreaking, heartwarming novel, ambitious, beautifully told, and elegantly crafted. Tara Conklin negotiates great vast swaths of time and tribulation, character and place, with grace, insight, and, simply, love.”
— Laurie Frankel, author of Goodbye for Now and The Atlas of Love

“THE HOUSE GIRL is an enthralling story of identity and social justice told through the eyes of two indomitable women, one a slave and the other a modern-day attorney, determined to define themselves on their own terms.”
— Hillary Jordan, author of Mudbound and When She Woke

“There’s so much to admire in THE HOUSE GIRL -- two richly imagined heroines, two fully realized worlds, a deeply satisfying plot -- but what made me stand up and cheer was the moral complexity of these characters and the situations they face. I’m grateful for this transporting novel.”
— Margot Livesey, New York Times bestselling author of The Flight of Gemma Hardy

“THE HOUSE GIRL stands as both a literary memorial to the hundreds of thousands of slaves once exploited in the American South and a mellifluous meditation on the mysterious bonds of family, the hopes and sorrows of human existence, and the timeless quest for freedom.”
— Corban Addison, author of A Walk Across the Sun

“Tara Conklin’s powerful debut novel is a literary page-turner filled with history, lost love, and buried family secrets. Conklin masterfully interweaves the stories of two women across time, all while asking us to contemplate the nature of truth and justice in America.”
— Amy Greene, author of Bloodroot

“A thoughtful work of fiction about freedom, love, and the continued price for former slaves with modern descendants. Conklin creates a convincing case of an unrecognized injustice with a novel that is both legalistic and artistic...A story of personal and national identity that you won’t want to miss.”
— Bookreporter.com

“Exquisite...Conklin takes us down a curious rabbit hole that drops us before a looking glass of uncomfortable truths about race, power, art, family, law and ethics...One of those books in which there’s not one, two or three, but about ten good parts you’ll want to read and reread.”
— Essence

“Absorbing...[Conklin] buttresses her legal savvy with strong historical research. She also has a fine way with a story.”
— Daily News

Tara Conklin is the author of the New York Times bestseller The House Girl. Trained as a lawyer, she worked for an international human rights organization and as a litigator at a corporate law firm in London and New York. Her short fiction has appeared in the Bristol Prize Anthology, Pangea: An Anthology of Stories from Around the Globe, and This Is the Place: Women Writing About Home. She holds a BA in history from Yale University, a JD from New York University School of Law, and a Master of Arts in Law and Diplomacy from the Fletcher School (Tufts University). She lives in Seattle, Washington, with her family.

As a servant in the Bell’s home Josephine is literally “The House Girl.” But how does this title also apply to Lina’s character? What is the significance of Lina leaving her father’s house at the close of the story?

Jasper tells Lina “anything can be art…if you do it well enough, if you love it.” Do you agree? What do you think Jasper means when he says “well enough?” How could this phrasing be problematic for a workaholic like Lina?

The definition of “family” is unclear in this story: Lina’s mother is absent for all of her life, Josephine’s son is fathered by her married master. As Lina reflects on her mother’s artwork she wonders whether you can create family connections: “What is blood and what is decision?” What is your response?

Separated by more than two centuries, Lina and Josephine’s characters never meet, but Conklin’s narrator tells this story through each of their perspectives. What similarities do you find between these two women? What would each character be able to teach the other?

On an empty page in her favorite book, Grace Sparrow writes “who is free?” We know that Josephine, Lottie and the others at the Bell plantation are literally enslaved. But who else experiences a lack of freedom in this story? Do you think these characters achieve freedom by the close of the novel?

Lu Anne Bell’s relationship to Josephine is intense. She allows this slave, who gave birth to a boy fathered by her own husband, to remain in their home. She shares the most intimate moments of vulnerability with her when her illness is at its worst. But how does Josephine feel towards Lu Anne? How does she perceive her role in Lu Anne’s life?

Taking us back and forth between Josephine and Lina’s worlds, the narrator gives us an intimate look into the lives of both women. But Conklin also introduces Caleb Harper and Dorothea Rounds as additional narrators, speaking through their letters. What did their narrations add to the story? How did they change your understanding of Josephine and others living and working in the Bell’s community?

Dorothea takes a risk telling Samuel about her work with her father in the Underground Railroad, only to have Samuel report them and watch as their barn and livelihood burned to the ground. Similarly, Josephine trusts Nathan with her intention to escape and Lina trusts Garrison with her ideas about the reparations case. How do you establish trust with a friend or family member? How do you identify certain people as those in whom you can confide?

At the close of the story Lina quits her job and announces to Oscar that she will move out of his home. Where does she find the resolve to make these two significant decisions? So little time has passed since she told Jasper that “not knowing” what her future held “would make [her ] crazy.” What has changed that Lina now feels bold enough to take such swift and final action?

Josephine “keeps” her memories in Mr. Jefferson’s chest of drawers. How is this similar to Oscar’s paintings of Grace? How do these characters confront the loss and pain they’ve experienced? How do they hide things away?

Jasper is humiliated when Dan and Garrison tell him that he is too white to be the lead plaintiff in the reparations case and Lina is shocked to see him sent away. What does race mean to the men at Clifton & Harp? How does it mean something different to Lina and Jasper?

Josephine is shocked to learn that the son she gave birth to at age fourteen survived and lives on a nearby farm. But even with this knowledge she decides to run alone. What do you make of this decision? Did she make this choice out of selfishness, a mother’s love or something else entirely?

In the final pages of the novel, Lina decides to call her mother, asking Jasper to dial the phone number. What do you think Lina will say? Is she ready to build a relationship? Has she forgiven her mother for leaving?

Many people ask Lina why she has chosen to become a lawyer. Does she ever give a satisfying answer? Lina’s law professor had taught her that the “law is the bastion of reason…there is no place for feeling.” Why does a career like this appeal to Lina, the artist’s daughter? How does this appeal wane throughout the story?