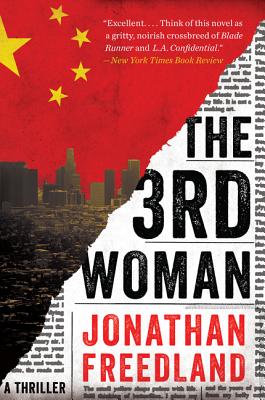 Journalist Madison Webb is obsessed with exposing lies and corruption. But she never thought she’d be investigating her own sister’s murder. Madison refuses to accept the official line that Abigail’s death was an isolated crime. She uncovers evidence that suggests her sister was the third victim in a series of killings hushed up as part of a major conspiracy.

In a United States that now bows before the People’s Republic of China, corruption is rife. She can’t trust the police, and the authorities dictate what the “truth” is. With her life on the line, Madison must give up her quest for justice—or face the consequences. . . .

Praise For The 3rd Woman: A Thriller…

“Excellent…. This is an intelligent, finely crafted mystery, a speculative thriller that brilliantly channels the anxieties of our time.”
— New York Times Book Review

“Excellent…. Think of this novel as a gritty, noirish crossbreed of Blade Runner and L.A. Confidential.... This is an intelligent, finely crafted mystery, a speculative thriller that brilliantly channels the anxieties of our time.”
— New York Times Book Review

“The writing is concise and compellingly readable.… Freedland has another winner here.”
— Booklist

“The United States’ debt to China has changed the balance of power dramatically in this convincing near-future thriller from Freedland...who keeps the pages turning and unveils a twist that few will anticipate.”
— Publishers Weekly

“The story, spiced with murder and torture, is engrossingly labyrinthine.”
— Sunday Telegraph

“A killer novel…full of intrigue, plotting, and duplicity.”
— Piers Morgan

“Nobody does the high-IQ, high-octane thriller better than Jonathan Freedland.”
— Tony Parsons