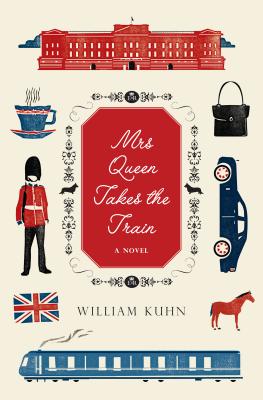 An absolute delight of a debut novel by William Kuhn—author of Reading Jackie:  Her Autobiography in Books—Mrs Queen Takes the Train wittily imagines the kerfuffle that transpires when a bored Queen Elizabeth strolls out of the palace in search of a little fun, leaving behind a desperate team of courtiers who must find the missing Windsor before a national scandal erupts. Reminiscent of Alan Bennett’s The Uncommon Reader, this lively, wonderfully inventive romp takes readers into the mind of the grand matriarch of Britain’s Royal Family, bringing us an endearing runaway Queen Elizabeth on the town—and leading us behind the Buckingham Palace walls and into the upstairs/downstairs spaces of England’s monarchy.

William Kuhn is a biographer and historian, and the author of Reading Jackie, Democratic Royalism, Henry & Mary Ponsonby, and The Politics of Pleasure. He lives in Boston, Massachusetts. This is his first novel. His next book, a work of historical fiction, explores the friendship over nearly forty years of Isabella Stewart Gardner and John Singer Sargent.


Praise For Mrs Queen Takes the Train: A Novel…

“You’ll come away thinking Her Majesty, at least this fictional one, charming, caring, thoughtful and brave. . . . A delightful escape. We can only hope there are more train rides in Her Majesty’s future.”
— USA Today

“[A] charmer of a first novel. . . . This Elizabeth is delightful, slyly funny company. You’ll never look at the real one the same way again.”
— People (3 ½ stars)

“Poignant and sweet, MRS QUEEN TAKES THE TRAIN is a comic study of the British class system, an unusual testament to the possibilities of friendship outside normal comfort zones and an affirmation of the humanity within all of us.”
— Richmond Times-Dispatch

“A delightful read, a bit of fiction (the train journey) set into nonfiction (everything else), and a sly look at how the monarchy is changing along with—or maybe two beats behind—the rest of Britain.”
— Minneapolis Star Tribune

“A witty, contemporary story of the Downton Abbey-esque tensions between servants and employers, the young and the old, and tradition and modernity.”
— Glamour.com

“This book is the perfect cup of tea for the year of the Queen’s Diamond Jubilee. Give it to lovers of all things British. It’s also a good bet for fans of Alexander McCall Smith.”
— Booklist

“Kuhn explores not only the queen’s inner life, but the Downtown Abbey style-tensions between servants and royals, the old guard and the new. . . . Royal watchers and students of class alike will enjoy this smart. . . tale.”
— Publishers Weekly

“Kuhn’s first novel ought to find an avid readership among the filmgoers who flocked to The King’s Speech and The Queen. . . . An affectionate, sympathetic but also unstinting look at the woman inside the sovereign.”
— Kirkus Reviews
or
Not Currently Available for Direct Purchase
Copyright © 2020 American Booksellers Association