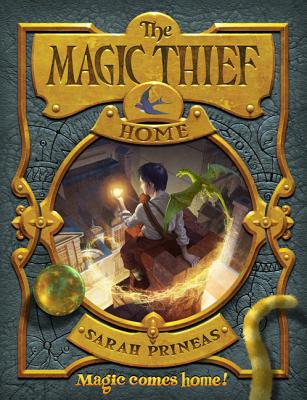 The Magic Thief: Home, the fourth book in the acclaimed Magic Thief series, finds new wizard Conn back where he started—accused of being a thief.

Despite successfully securing a balance between the competing magics of Wellmet, Conn is not happy. Duchess Rowan has promoted him to ducal magister, but the other wizards see him only as a thief.

But something sinister is brewing, as magicians' locus stones are being stolen and magical spells are going awry. As Conn faces old enemies and powerful magical forces, is he strong enough to save the city he calls home?

Sarah Prineas lives in the midst of the corn in rural Iowa, where she wrangles dogs, cats, chickens, and goats, goes on lots of hikes, and finds time to write. She is also the author of Ash & Bramble, a retelling of Cinderella. She is married to a physics professor and has two kids. You can visit Sarah online at www.sarah-prineas.com.