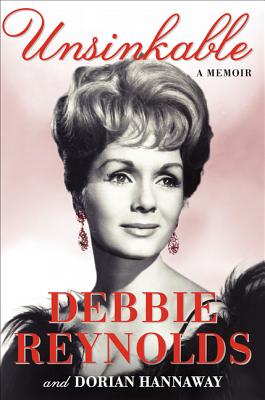 Unsinkable is the definitive memoir by film legend and Hollywood icon Debbie Reynolds.

In Unsinkable, the late great actress, comedienne, singer, and dancer Debbie Reynolds shares the highs and lows of her life as an actress during Hollywood’s Golden Age, anecdotes about her lifelong friendship with Elizabeth Taylor, her experiences as the foremost collector of Hollywood memorabilia, and intimate details of her marriages and family life with her children, Carrie and Todd Fisher.

A story of heartbreak, hope, and survival, “America’s Sweetheart” Debbie Reynolds picks up where she left off in her first memoir, Debbie: My Life, and is illustrated with previously unpublished photos from Reynolds’s personal collection.

Debbie Reynolds died on December 28, 2016, at the age of 84, just one day after the death of her daughter, actress and author Carrie Fisher.


Praise For Unsinkable: A Memoir…

“Anyone who loves Hollywood and movies is bound to enjoy this lively, funny book, filled with candid recollections. Debbie was a movie-struck kid who experienced the last days of Hollywood’s Golden Age, and I love her clear-eyed memories.”
— Leonard Maltin

“[Reynolds is] indisputably a grand dame of show business.”
— NPR on UNSINKABLE

“Debbie Reynolds knows exactly how to steal the scene, wring tears, and most important, how to leave the audience feeling thoroughly entertained.”
— New York Journal of Books on UNSINKABLE

“Nothing could sink this lady.”
— New York Post on UNSINKABLE

Debbie Reynolds was an actress, comedienne, singer, dancer, and author best known for her leading roles in Singin' in the Rain and The Unsinkable Molly Brown, and on TV as Bobbi Adler in Will & Grace. After more than sixty years in the entertainment industry, she was a true Hollywood icon, beloved by millions of fans of all ages around the world. Debbie Reynolds died on December 28, 2016, at the age of 84, just one day after the death of her daughter, actress and author Carrie Fisher.

Dorian Hannaway was the director of late-night programming at CBS-TV for more than fifteen years, supervising the production of The Late Show with David Letterman; The Kids in the Hall; and The Late, Late Show. She has known Debbie for more than thirty years, and has written and produced many projects with her.