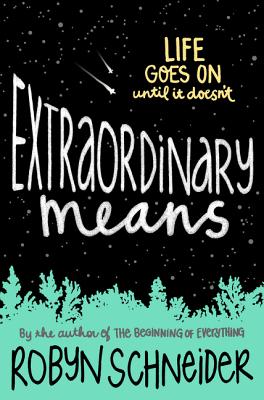 John Green's The Fault in Our Stars meets Rainbow Rowell's Eleanor & Park in this darkly funny novel from the critically acclaimed author of The Beginning of Everything.

Up until his diagnosis, Lane lived a fairly predictable life. But when he finds himself at a tuberculosis sanatorium called Latham House, he discovers an insular world with paradoxical rules, med sensors, and an eccentric yet utterly compelling confidante named Sadie—and life as Lane knows it will never be the same.

Robyn Schneider's Extraordinary Means is a heart-wrenching yet ultimately hopeful story about the miracles of first love and second chances.

“Schneider’s subtlety, combined with themes about learning to live life fully, makes this an easy recommendation for those seeking titles similar in premise to John Green’s The Fault in Our Stars.”
— School Library Journal

“This is a wonderfully told story. The dialogue moves the plot along at a fast pace, and Ezra, with all his flaws, is a character to whom readers can relate. Teens won’t want to put this one down.”
— School Library Journal

“THE BEGINNING OF EVERYTHING is a tragic romance of the best kind that leaves the reader feeling as though they are part of the story, and wishing there was more.”
— Voice of Youth Advocates (VOYA)