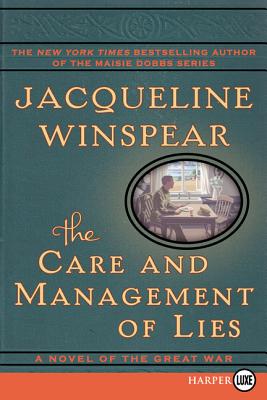 “Winspear has returned—via a good new, standalone, non-mystery novel called The Care and Management of Lies—to the wartime period that clearly continues to haunt her. In a publishing season crowded with commemorations of the outbreak of World War I...Winspear’s books more than hold their own.” — Maureen Corrigan, NPR's Fresh Air

“Captivating….It is in Kezia’s imagination and kitchen where this tragic story of war, passion, love and friendship comes alive. Winspear illustrates how food-whether it’s imaginary or real-can provide the perfect amount of tenderness and compassion when it’s needed the most….A suspenseful wartime narrative.” — San Francisco Chronicle

“Jacqueline Winspear is one of our best….Beautifully imagined and executed….As with every Winspear novel, there is beautiful writing-and in Kezia and Tom, two characters you won’t soon forget.” — USA Today

“Fiction at once fresh and timeless, intimate and sweeping that chronicles the challenging friendship between a suffragist and a farmer’s wife….A rare stand-alone novel by the author of the beloved Maisie Dobbs series.” — O, the Oprah Magazine

“In a stand-alone departure from her popular post-WWI mystery series featuring psychologist Maisie Dobbs, Winspear has created memorable characters in a moving, beautifully paced story of love and duty.” — Booklist

“Winspear knows the history of the war that changed the world. In The Care and Management of Lies, she’s telling us the story, she’s bringing it home. Beautifully, tragically, indelibly.” — Bobbi Dumas, NPR Books

“A winning stand-alone tale….While questioning war’s value and showing its terrible effects off the battlefield, Winspear fashions a stunning trajectory for her main characters.” — Publishers Weekly

“Without questioning either the cause of the war or the dubious tactics employed…these characters simply get on with it, reaffirming our faith in the possibility of everyday nobility....A sad, beautifully written, contemplative testament.” — Kirkus

“s much a story of the home front as of the battlefield, this new stand-alone novel is, above all, a moving tale about the beauty of those very virtues—fortitude, faithfulness, compassion—that the Great War called into question.” — Washington Post

“Just as strong [as the Maisie Dobbs series]-enough to guarantee satisfaction for even the most fervent Maisie fan.” — Seattle Times

“Without questioning either the cause of the war or the dubious tactics employed…these characters simply get on with it, reaffirming our faith in the possibility of everyday nobility....A sad, beautifully written, contemplative testament.” — Kirkus Reviews (starred review)

“Winspear’s fans should welcome the keen period detail and thoughtful tone so familiar from the Maisie Dobbs books, while historical fiction readers will be gripped by this sensitive portrayal of ordinary men and women on the home front and battlefield.” — Library Journal

“An engaging picture of the human spirit in a distant time of war, World War I, from the battlefields to the home front in an English village.” — Herman Wouk, author of The Winds of War and War and Remembrance

“In this dazzling novel Jacqueline Winspear writes irresistibly about the First World War, both in the trenches of France and the fields of England. Her characters walk off the page and into our imaginations, as we fight with them, farm with them, cook with them. I devoured this book.” — Margot Livesey, author of The Flight of Gemma Hardy

“A haunting evocation, from an unusual angle, of the war that cast such a shadow over the whole 20th century. Jacqueline Winspear knows her native England, and the human heart, very well indeed.” — Adam Hochschild, author of To End All Wars: A Story of Loyalty and Rebellion 1914-1918

“There is power in subtlety. This one is a stunner.” — Martin Cruz Smith, author of Tatiana and Gorky Park